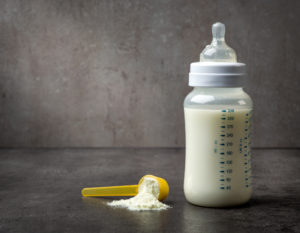 “In a study recently published in the Journal of Pediatrics, researchers studied babies who had lost a significant amount of weight after birth, which, while common, can be dangerous. They randomized the babies into two groups: one got a small amount of formula after each breastfeeding until the mother’s milk was fully in, and the other group did not. They found that the babies that got the formula were less likely to be readmitted to the hospital, and were no less likely to be breastfeeding a month out.”

“But as we do all this, we need to remember that formula isn’t evil. In fact, sometimes it can be a tool to support breastfeeding — by supplementing newborns that have lost a risky amount of weight, by supplementing the milk supply of mothers who would otherwise give up entirely, by allowing working mothers who can’t pump enough milk for all their hours of work to keep breastfeeding as long as they would like. It’s better that babies get some breast milk than none at all, but if we make it an all-or-none proposition, we may inadvertently cut breastfeeding short.”

“When we demonize formula we also run the risk of shaming women who, for any number of good reasons, choose not to breastfeed. There are many other ways besides breastfeeding to help babies grow and be healthy; it’s important to keep that perspective.”