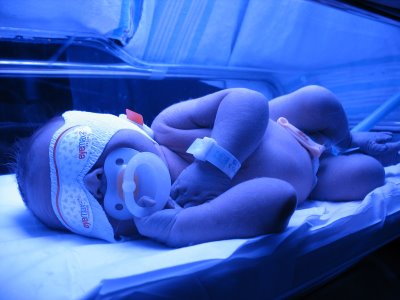 The true rates of excessive jaundice and hospitalizations of newborns for phototherapy due to jaundice has been recently published in JAMA Pediatrics published online April 11, 2016. In a study of 104,460 babies born between January 2010 and December 2013 in the Kaiser Permanente Northern California (KPNC) Healthcare System reported than an astonishing 12.4% of babies developed pathological hyperbilirubinemia of greater than 15 mg/dL in the study period, which has been shown in the scientific literature to increase risk of developmental disabilities. This translates to 12,953 babies or almost 12 babies a day.  In addition, 5.7% of babies required phototherapy admission, translating to 5954 newborns or 5 babies a day.

California has a state mandate to require Baby-Friendly certification in all its hospitals by 2020, which requires that >80% of eligible newborns be exclusively breastfed at discharge, the primary quality metric of the BFHI. Many California hospitals are working towards that designation and their exclusive breastfeeding rates at discharge are tracked by the California Department of Public Health. Estimates of excessive jaundice in the KPNC hospital system, which has among the highest exclusively breastfeeding rates at discharge, all except 2 reaching the >80% requirement, was described by this study. Seventy-one percent of these hospitalizations were extensions of the original birth admission, which means pathological jaundice was detected before discharge and the newborn’s hospital stay was extended to reduce the pathological effects of bilirubin, namely brain injury.

This is an astonishing number of newborns requiring phototherapy for jaundice as the majority of pathologic jaundice cases are related to dehydration or underfeeding from exclusive breastfeeding, an entity that the Academy of Breastfeeding Medicine calls starvation jaundice.  Normally, 100% of bilirubin is removed through the gastrointestinal system carried away by milk or food passing through. When  high bilirubin levels are circulating as typical of the newborn period, a small portion of circulating bilirubin can be excreted by the kidneys through urine, a process assisted by phototherapy. Since the majority of bilirubin is excreted through the gastrointestinal system, a newborn who is underfed through colostrum-only feeding can accumulate abnormally high levels of bilirubin in the blood.  Underfeeding from early exclusive breastfeeding due to poor latch or, more commonly, insufficient breast milk production, results in hyperbilirubinemia or severe jaundice in exclusively breastfed babies.  A minority of babies have increased rates of bilirubin production from blood-type incompatibility, called hemolytic jaundice.  Both starvation-related jaundice as well as hemolytic jaundice are improved with supplemental feeding because the primary means by which the body eliminates bilirubin is through milk passing through the intestines.

The KPNC system has the highest exclusive breastfeeding rates at discharge in California according to 2014 data from the California Department of Public Health. Similar trends were found in 2013, within the time period examined by the study, which reported Kaiser Walnut Creek and Kaiser Oakland as having the highest exclusive breastfeeding rates at discharge of 97.5% and 95%, respectively. Considering that an estimated 22% of mothers have delayed lactogenesis II, which puts her newborn at risk for excessive weight loss and hyperbilirubinemia, a 95-97.5% exclusive breastfeeding rate predictably results in complications and hospitalizations occurring to 6-12% of newborns, as confirmed by this study. Once again, this study shows complications and hospitalizations for jaundice and dehydration are COMMON and occur at high rates in Baby-Friendly-compliant hospitals.  1 in 17 babies are hospitalized for jaundice and 1 in 8 experience levels of hyperbilirubinemia that increases risk for developmental disabilities.  “Baby-Friendly” is in fact, NOT baby-friendly.  Fed is best.

[Blog corrected 8/31/2018 to reflect the accurate designation status of the KPNC hospitals and their exclusive breastfeeding rates. The blog was also corrected with regard to the analysis of the true percentage of babies at a Baby-Friendly compliant hospital system showing the number of babies developing hyperbilirubinemia and those requiring phototherapy admissions.]

Published by The Fed Is Best Foundation

View all posts by The Fed Is Best Foundation