The following mother’s story was posted on the Facebook group “Reporting Negligence Resulting in Infant Starvation.” It was written by Megan Jackson, who gave us permission to reproduce it on FedIsBest.org. You can view the original post here.

After experiencing firsthand the nightmare that breastfeeding can be, I had all but decided to skip trying to nurse my second child and go straight to formula and a bottle. Somehow, by the time he was born, the pressure to try again was already so strong that I was absolutely determined he would be exclusively breastfed.

Owen is the product of a typical vaginal delivery, born healthy at an average 7 pounds 9 ounces. We were released from the hospital after 24 hours and I was thrilled to get home to my 2 year old little girl as a family of four.

Owen latched on with no issues and nursed constantly. Since my daughter had latch issues, I had no idea that it wasn’t normal for a newborn to nurse for hours at a time. I was so happy breastfeeding was a success this time around. My mom and I noticed how Owen had more of an “olive” skin tone than his sister did, never connecting it to jaundice.

Imagine my surprise when my great little eater and sleeper had dropped to nearly 6 pounds by his one week check up. I knew he had dropped some weight but had no clue it was so much. His doctor took one look at him and I could tell she was nervous when she sent us to labs. 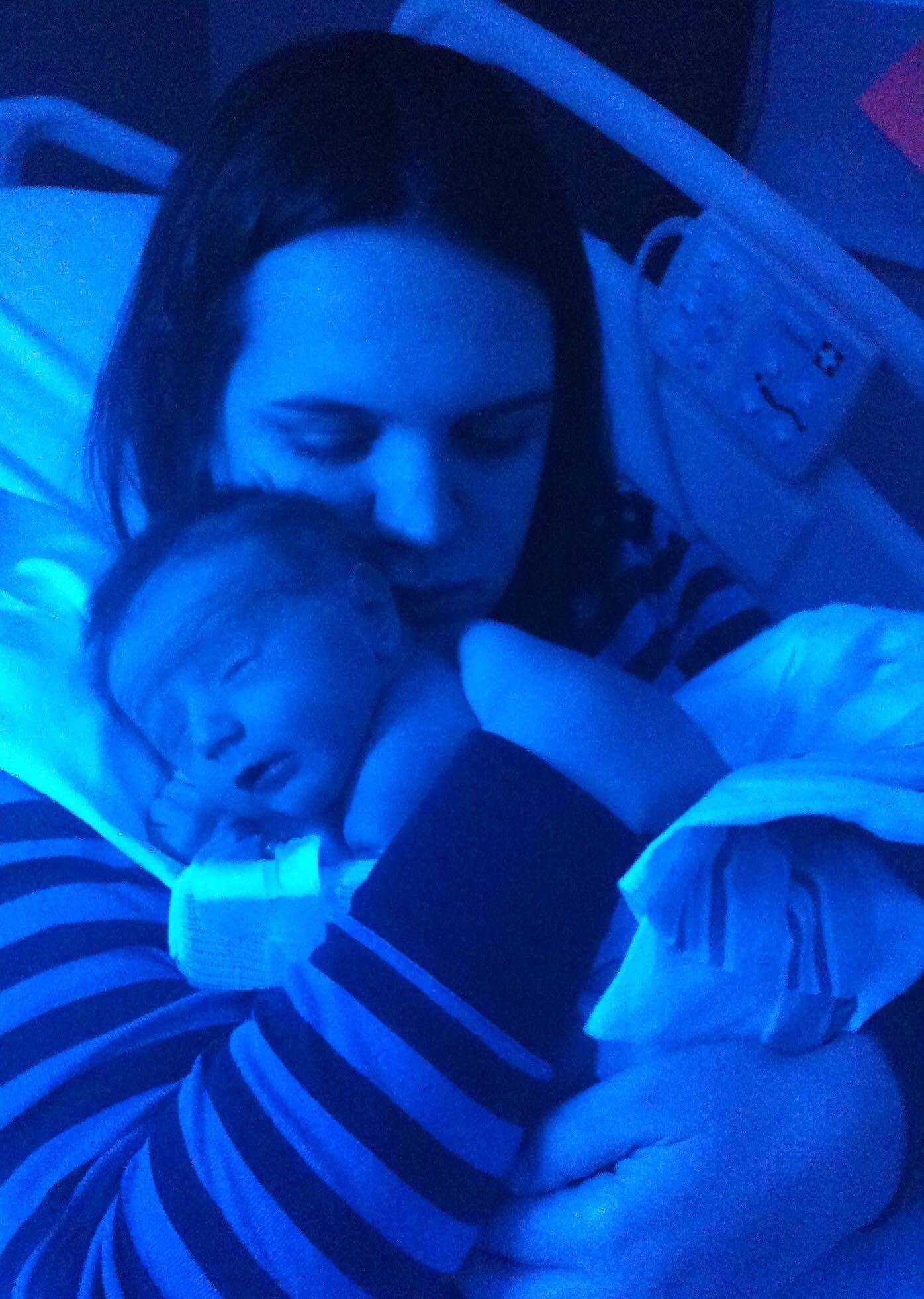 His bilirubin came back at 17 and we were told to check in to the hospital for jaundice treatment that day. No one expressed how urgent it was to get to the hospital. We went home, ate lunch, packed bags for the hospital and dropped our daughter off with her grandmother. Getting through hospital admissions took at least an hour. Within 4 hours his bilirubin had risen to 22.

My sweet little newborn spent 5 days with a mask over his eyes getting light therapy. This wasn’t how it was supposed to be- me, an exhausted new mother back in the hospital watching her newborn in a box beside her.

It was exhausting. Every three hours I repeated the same process: nurse 45 minutes, pump (took approx 45 minutes), supplement the 1-2 mL I was pumping with a syringe, wait for the blood draw to come back and hope for a drop in numbers, attempt to get some sleep, repeat. There were many tears of exhaustion. I wanted to hold my new child, I missed my daughter at home, I longed for some decent sleep, my body ached from giving birth less than 10 days ago and I was trying so hard to avoid formula.

After several days they finally brought in the formula and said his numbers just weren’t dropping enough. Why had I not just started with this from the beginning? I could be home right now. Still I kept nursing, kept pumping. It was clear I was producing little to nothing but the message to mothers is don’t give up, your milk will come in. Breast milk is the best- right?

We were finally sent home after what seemed like an eternity. 24 hours later Owen was lethargic and we were back in the ER. It took hours just to get admitted. A NICU nurse poked and prodded at him, it looked like torture and all I could think was “hasn’t my little two week old son had enough?” By the time we were admitted it was 3 am and we were stuck in a shared room with one chair for both my husband and me. Owen got fluids for another 24 hours. To say we were drained is an understatement.

At 3 weeks old I finally gave up on pumping and was at 100% formula. We still struggled to get him to take a bottle. We must have purchased every type of bottle, nipple, formula. At 4 weeks we were back in the hospital again. No one could figure out what was wrong. Finally, like magic, we found a specific formula he would take (alimentum, ready to feed version only).

Growing up he was abnormally quiet. I never bonded with Owen when he was an infant like I did my daughter. I thought the problem was me. I would hold him and love on him, but he didn’t giggle or coo like other babies.

We would try so hard to make him laugh, the only way we could find was to tickle him. It almost looked like it was painful for him to laugh as a baby.

He never waved, blew kisses or clapped. He didn’t turn his head when we called his name. We joked that we should have named his “Mickey” because his face was glued to the TV when Mickey Mouse was on. He didn’t reach for toys or shriek in delight. He didn’t raise his arms up and say “mama” when I walked by.

Even as a baby he was in his own world. He was never curious about what was in the next room or around the corner. His motivation to crawl was to get to an iPad.

At 12 months his doctor suggested we have tubes placed in his ears, saying all his ear infections may have caused some hearing loss. When we went in for his 15 month appointment the tubes had been placed but we hadn’t seen any changes. His doctor casually suggested it maybe “Aspergers or something” but we should wait and see how he was at 18 months.

When I got home I searched autism online and had no doubt Owen was autistic. I contacted the few people I knew with autistic children including Christie. Thank goodness for Christie and her heart of gold! I would have been absolutely lost without her. Because of Christie I was able to get Owen the services he needed as fast as I could.

Today, Owen is on the level of a 10 month old in speech and between 15-17 month old in occupational and physical therapy. He will be 3 in January (2 weeks). When I’m out in public and I see a baby sitting in a high chair clap or wave, I see a toddler run by, or a two year old say an entire sentence, my heart breaks a little. Now it’s even more disappointing to see the engagement of three-year-olds as his birthday is so close.

My little boy says the word “ball”, though not very clearly, and that is it. He still isn’t running, clapping or waving. He sometimes turns to his name, but I can’t trust that he will come to me when I call for him. He has feeding and sensory issues and a very limited diet. He is constantly sensory seeking, chewing on hair, pushing off furniture and pushing his feet into people. He is getting stronger and pulls his diaper off constantly which means cleaning up messes often along with fights just to get him and keep him dressed.

What can’t be measured is how incredibly sweet, happy and loved he is. How much we all cheer when he takes a bite of food. How excited we get when he picks up a ball, smiles and says “baal!” How infectious his laughter is. Most importantly, how he has taught us to celebrate and appreciate the small victories in life.

Published by The Fed Is Best Foundation

View all posts by The Fed Is Best Foundation