Professionals in the medical community and parents have asked questions regarding whether or not newborn starvation from insufficient exclusive breastfeeding is linked to Autism Spectrum Disorder (ASD) in children and what research has been done regarding a possible connection.

The short answer is no. There is no definitive linkage, and we don’t have clear answers when we’re queried about this fact – because in fact, the science is not entirely clear on this point.

Formally, Autism Spectrum Disorder is the name for a group of developmental disorders, which you can read more about here. Although, it can look very differently from person to person, ASD is currently defined as a person with 1) ongoing social problems that include difficulty communicating and interacting with others and 2) repetitive behaviors as well as limited interests or activities.  When presented to a diagnosing physician, the combination of these two factors will typically result in an ASD diagnosis. The diagnosis describes a constellation of developmental characteristics but do not describe the cause of the disorder.  There is plenty of discussion about whether autism rates are increasing or if the disorder is simply being diagnosed more frequently, neither of which we will address here as it is outside of the scope of our Foundation’s work.

At this time, science cannot tell us precisely why ASD occurs. Scientists have found positive associations between genetic and environmental variables and an individual’s eventual diagnosis. While a small percentage of individuals with ASD have a purely genetic origin, the vast majority of individuals with ASD do not have an identified genetic cause.  Also at this time, there is no one definitive answer as to what is triggering the disorder, just a series of risk factors gleaned from data analysis of children with ASD. 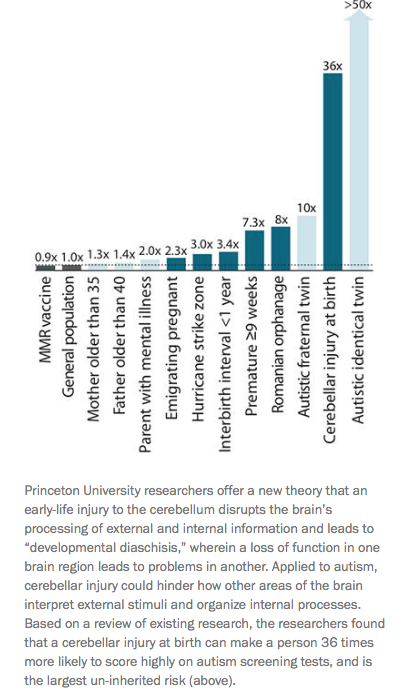 Among the risk factors that have been strongly associated with an autism diagnosis is injury to a part of the brain called the cerebellum around the time of birth. A review article published in 2014 in the neuroscience journal Neuron stated the following, “Based on a review of existing research, the researchers found that a cerebellar injury at birth can make a person 36 times more likely to score highly on autism screening tests, and is the largest uninherited risk.” In a review published in Seminars in Fetal and Neonatal Medicine on bilirubin-induced brain injury, the cerebellum was noted to be the most vulnerable region to injury in severe hyperbilirubinemia and is in fact the definitive lesion found in animal models of kernicterus, the brain injury caused by high bilirubin levels. In this same issue, leading neonatal hyperbilirubinemia investigator, Dr. Vinod Bhutani, who developed the bilirubin nomogram used by pediatricians to manage neonatal jaundice, noted that the areas affected in schizophrenia and autism were similar to the areas affected in infants experiencing Bilirubin Induced Neurologic Disorder (BIND), the more subtle form of kernicterus. He wrote, “Thus, in terms of brain volumetrics, schizophrenia and autism spectrum disorders have a clear degree of overlap that may reflect shared etiological mechanisms. Overlap with injuries observed in infants with BIND raises the question about how these lesions are arrived at in the context of the impact of common etiologies.”

Whether babies who develop bilirubin-induced brain injury go on to develop the condition we know as ASD or simply look like they have ASD, we can’t say for certain. Without the appropriately controlled animal models that show poor feeding leads to hyperbilirubinemia (which is a known correlation) and then to an autism diagnosis, no one can say or claim that brain injury from poor feeding and autism are the same thing. As previously stated, there’s a lot that science does not know about the exact pathology of autism, and the autism spectrum is understood to include a wide range of individuals with a very wide range of cognitive skills and abilities. The same can be said about individuals who have sustained brain injury, but that does not mean that they are one in the same.

What we can tell you is that science does say that there is a causal relationship between newborn hypoglycemia and brain injury, and this brain injury can result in developmental disabilities. The latest article published in the Hospital Pediatrics Journal on underfed lethargic breastfed newborns who develop hypoglycemia suggests that by the time they have reached this stage of lethargy, there is evidence that they may have experienced brain injury to a third to almost the entire brain.  These children went on to have long-term neurological disabilities including epilepsy, visual impairment and feeding difficulties. Every brain cell including those in the cerebellum is susceptible to brain injury from caloric deprivation caused by hypoglycemia. The number of insufficiently breastfed babies who develop hypoglycemia and subsequently receive brain MRIs is exceedingly low because it is not widely offered to hypoglycemic breastfed babies.  Therefore, we do not know the number of babies experiencing this phenomenon.  What we do know now, from a study published in the Journal of Clinical Diagnostic Research, that 10% of healthy, term exclusively breastfed newborns are hypoglycemic to <40 mg/dL by 6 hours of life when monitored up to 48 hours. The rate of hypoglycemia was even higher among first-born exclusively breastfed newborns as 23% developed hypoglycemia. The levels of hypoglycemia experienced by these newborns were to a level that has been shown in another study published in JAMA Pediatrics, to be associated with a 50% reduction in their ability to pass the 4th grade proficiency test in literacy and math, even with the hypoglycemia corrected.  This is consistent with what the basic science of hypoglycemic brain injury says about hypoglycemia.  Even short episodes of hypoglycemia can result in brain injury that is irreversible and can have long-lasting effects on a child’s cognitive development.

We have known for decades that perinatal brain injury is the leading cause of language, motor and cognitive disability in children, so while we can speculate that it is possible that starvation-related brain injury could be interpreted as ASD,  as practitioners of evidence-based medicine with a lack of comprehensive evidence to officially support that, we cannot draw any formal conclusions associating these two concepts.

Although the links between poor feeding and autism have not been fully elucidated, the causal relationship between poor feeding and brain injury should prompt mothers and health providers to learn about and adopt safe breastfeeding or safe formula-feeding practices. Likewise, it is not a reason to avoid exclusively breastfeeding a newborn if that is indeed something that a mother’s supply allows and it is her preferred choice of infant feeding. We also do not support mothers avoiding vaccinations for their children who cite the same insult-to-ASD claim, as that claim, along with the since-debunked study that suggested it, have long been used as a method to dissuade parents from getting their children vaccinated. While some parents believe that vaccines can cause autism because of alleged injury, the wide body of scientific literature shows that this is simply untrue.

Most recently, a large-scale study out of California published in the September issue of the journal Pediatrics looked into the possibility of a relationship between infant hyperbilirubinemia (excessive jaundice) or phototherapy treatment for hyperbilirubinemia and ASD diagnosis. Why would there be a study of this nature?

Because, per the authors “It is hypothesized that environmental insults occurring during early brain development can lead to ASD among infants who are genetically vulnerable,” and jaundice is well-known to cause brain injury when it is severe and sustained. The study showed there was an increased risk of autism in the children who developed hyperbilirubinemia and those that required phototherapy.  But when looking at the relationship between multiple variables, it appeared that it wasn’t the high bilirubin or need for phototherapy that increased the risk for autism diagnosis. What this means, is that the factor that lead to the development of autism is another factor possibly occurring in the babies that developed hyperbilirubinemia. The factors they did find were factors that we have found to be risk factors for feeding problems related to breast milk supply and hypoglycemia in newborns, including older parental age, higher parental education and having a small or large baby.

Our bottom line is, as it relates to unintentional infant starvation, that it does not matter what the diagnosis is or could be. We want to protect our children through safe infant feeding practices regardless. We want to support mothers in making empowered feeding choices that keep their babies safe and well-fed. There is nothing wrong with children of any developmental category!

Ultimately, in order to protect the brains of every baby, we believe that #FedIsBest.

For more information on autism from the National Institutes of Mental Health, go to https://www.nimh.nih.gov/health/topics/autism-spectrum-disorders-asd/index.shtml

6 thoughts on “Starvation- and Jaundice-related Brain Injury, Autism and What Science Does and Doesn’t Say”