I had no idea how ignorant I truly was.

All the odds were stacked against us from the get-go. The day after my baby was born, the pediatrician assessed her in the hospital and brought it to our attention that she had a severe tongue-tie and that it would need to be revised if I didn’t want to have any pain while breastfeeding. There was an Ear, Nose & Throat specialist on call that was able to do the procedure that afternoon, so we agreed to go through with it. Before her tongue was revised she had a good, strong latch- painful for me, but strong. When they brought her back after the procedure, everything was off; her suck was weak and disorganized and she no longer knew how to use her tongue to suck correctly. Being a first time mother, I had no idea how breastfeeding worked and I had no idea it could possibly take days for your milk to come in.

I had my baby over the weekend and since there was no lactation consultant available until Monday I pleaded with the nurses to help me. I kept telling them that something was wrong and that she wasn’t latching on like she was before. They assured me that everything would be okay and that my milk would come in soon. Upon discharge, the nurse handed me the standard goody bag and put a case of formula in there ‘just in case’ breastfeeding didn’t work out. I cringed at the thought of having to use it.

Once we were home, I did nothing but try and establish a successful breastfeeding relationship. It’s all we did. Even though we nursed around the clock, she was  hungry, screaming, and frustrated. I decided to cave and put some formula in a syringe to drop while breastfeeding in the hopes of enticing her to latch on better. It seemed to satisfy her a little bit but she still wasn’t latching on. On her first checkup with the pediatrician, we learned that she had lost 1lb 1oz. I expressed my concerns about my 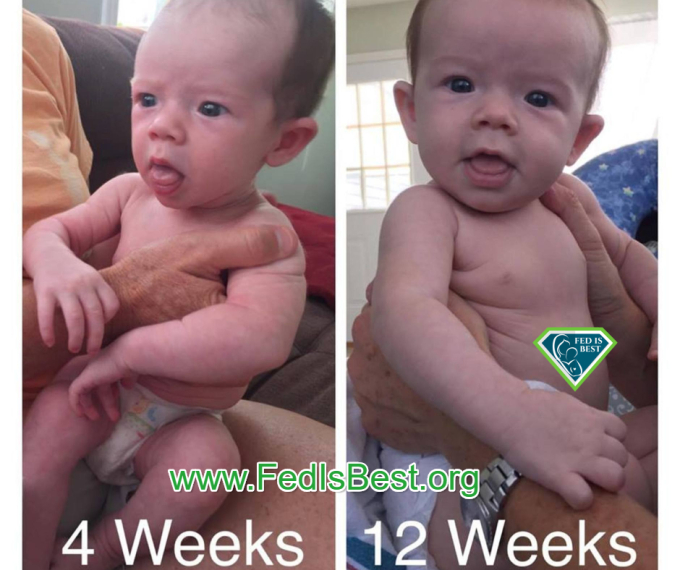 milk not feeling like it had come in. He was concerned about the weight loss but never once mentioned the option to stop exclusive breastfeeding, he just told me to keep trying and that my milk would come in. He gave me the number of a lactation consultant and told me to come back for a weight check in a few days.

I live in small town and this lactation consultant was the only one in the area. For whatever reason (to this day I will never know) she refused to meet with me. I begged and pleaded for a home or office visit; she would only text me and suggest things like a nipple shield or trying different nursing positions. I was stubborn, and figured if she wouldn’t meet with me it must mean our issues were not that big of a deal and that me and my baby could figure it out on our own. Weight check after weight check, my baby teetered back and forth at the same weight. On top of her feeding issues, my baby also had acid reflux. I tried to express to the doctor that all we were doing was nursing around the clock and all she was doing was spitting it back up; the doctor just told me to keep putting her at the breast and that I was overreacting about her amount of spit up.

It wasn’t until she was four weeks old and was screaming a piercing, pterodactyl-like scream that I got scared and knew something needed to be done. I met with a different pediatrician who took one look at her and told me I needed to take her straight to Children’s Hospital for evaluation. She was diagnosed with the dreaded ‘Failure to Thrive’.

We were in the hospital for four days.  I was instructed to breastfeed for thirty minutes, followed by two ounces of formula, followed by me pumping for fifteen minutes. I was to do that every three hours.

I was the kind of exhausted where I was talking to doctors and having no memory of the conversation immediately after it happened, and they expected me to go home and follow this same routine every three hours if I wanted this breastfeeding relationship to work.

So, that’s what I did for the next two weeks, and I went insane. Literally insane. My husband was afraid to go to work and leave me home with the baby, but I continued on because that’s what I thought was best for the baby. I finally found a highly recommended IBCLC an hour and a half away in Lexington, KY and scheduled a consult with her. We did a weigh-feed-weigh and found I was only giving about 20 ml of milk in a thirty minute feeding. She also brought to my attention that my daughter’s tongue-tie that was revised the day after she was born was done incorrectly and that she also had a lip tie which was never mentioned before. My baby had a bite-bite-bite-swallow pattern of eating instead of a suck-swallow-suck-swallow because she didn’t know how to suck properly. She was burning more calories trying to eat than she was actually taking in, and, because she was biting more than sucking, my milk supply had been close to nothing this whole time.

I was referred to a specialist in Louisville, KY to get the tongue and lip revised properly as well as a speech therapist to work on her suck. It took my baby six weeks to get back up to her birth weight. For the next month I put myself through torture trying to nurse, bottle feed, and pump – because that’s what I thought was best for my baby. Eventually I decided I couldn’t do it anymore, but I wasn’t quite ready to give up on breastfeeding, so I decided to supplement. Except this time I was going to formula feed first and supplement with breast milk, instead of the other way around. We continued this relationship for about two months, gradually decreasing our breastfeeding sessions and increasing formula intake until it just hit me one day…that I wasn’t doing this for her – I was doing this for me, and at her expense. We were no longer breastfeeding because it was what was best for her, we were breastfeeding because I was trying to prove that I still could. I wasn’t enjoying my baby. All this time, I hadn’t been bonding with my baby.

I needed to throw in the towel, because that truly, was what was best for her. Since we’ve ended our breastfeeding journey, we’ve both never been happier. I am enjoying her and bonding with her like I never did before. You don’t need to breastfeed to bond with your baby, you need a happy healthy mother and a happy, healthy baby. That’s it. That is a mistake that I will NEVER make again.