Our goal is to respond to the many statements that have been made about the Fed is Best Foundation and to answer questions we receive about what the Foundation stands for. Unfortunately, our #FedIsBest phrase has been used incorrectly by others, and it’s important that we clarify what it means and doesn’t mean

6. Does the FIBF believe all exclusively breastfed babies need supplementation before the onset of mature milk?

No, and we never have.

As health care providers, we have an ethical and moral obligation to fully inform mothers of both the benefits and risks of exclusive breastfeeding when promoting exclusive breastfeeding. The high rates of delayed onset of lactogenesis II, as well as conditions that cause a poor transfer of breast milk, carry serious risks to exclusively breastfed newborns, as they depend on daily increases in calories and fluids until mature milk arrives on day three. 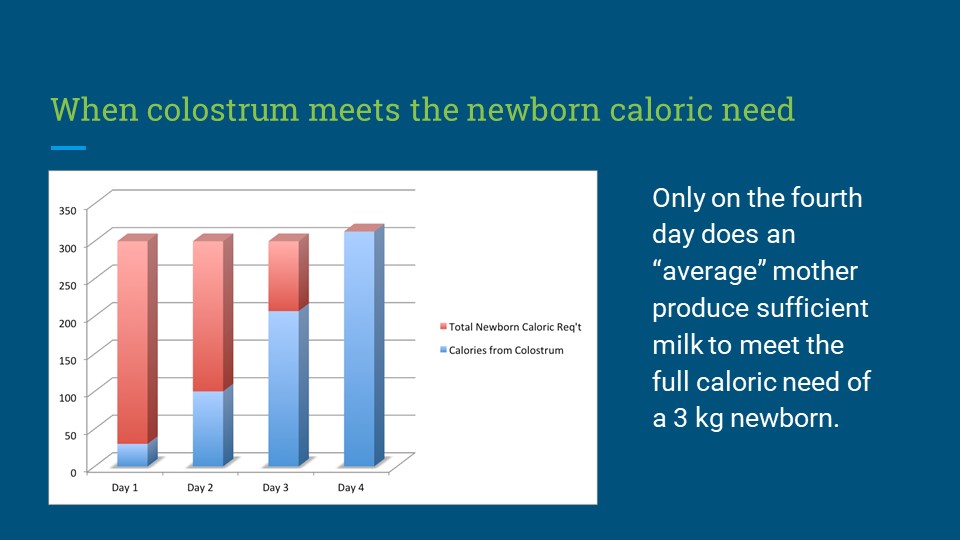 The current research tells us the actual rates of adequate breast milk production are unknown and the current estimates for lactation disruption range from 12-15% or one in eight mothers. We are learning that mothers are experiencing delayed lactogenesis II (onset of full milk supply greater than 72 hours post-birth) commonly, for complex biological and other unknown reasons. However, the fact that something is common does not mean it is normal or ideal. 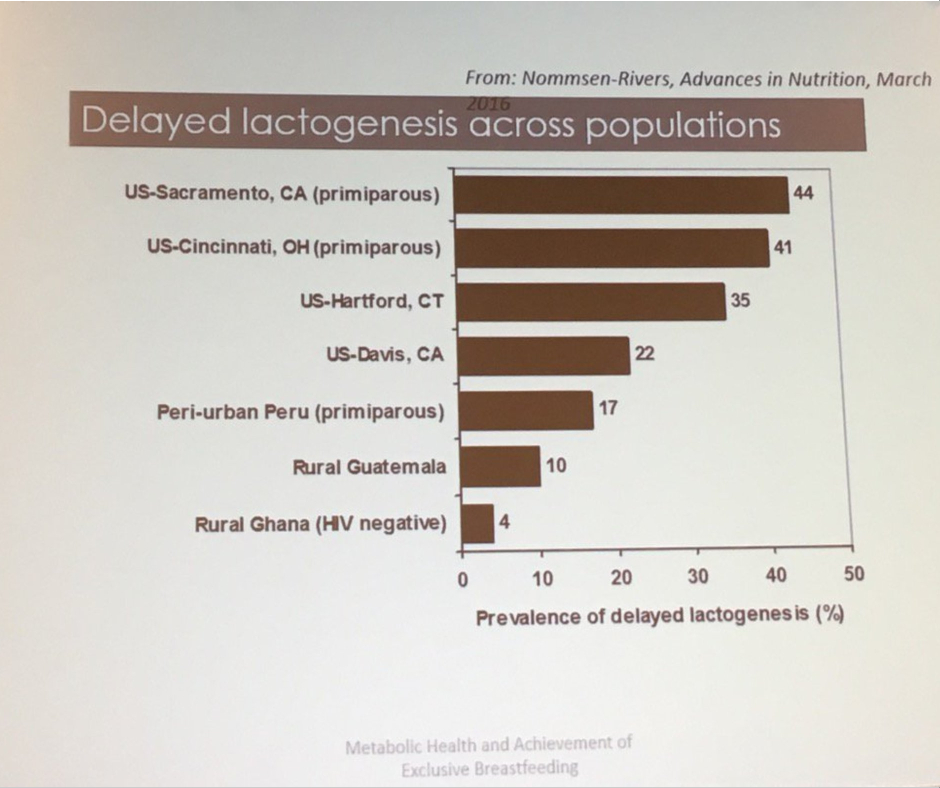 Twenty-two percent of mothers experience delayed onset of milk production, which increases the risk of excessive weight loss (>10%) in their newborns seven-fold (Dewey et al., 2003).  Delayed onset of lactogenesis II (DOLII) was most common among first-time mothers, mothers with high BMI, and other factors that increased the risk of ineffective breastfeeding.

Delayed onset of lactogenesis II also occurred commonly outside of the U.S. as found in this study from a Brazilian Baby-Friendly Hospital showing it occurred to 19% or almost 1 in 5 mothers. (de Oliveria Rocha et al., 2019)

Another study of first-time mothers showed that an astounding 44% experienced delayed onset of lactogenesis II. (Nommsen-Rivers, et al. 2010). The primary risk factors for DOLII were:

The scientific literature shows that colostrum, in fact, has fewer calories, containing 54 Calories/100 mL compared to 66-77 Calories/100 mL in mature breast milk (Gidrewicz and Fenton, 2014). Therefore, in the period before lactogenesis II, an exclusively colostrum-fed newborn is “fasting,” meaning that the baby is consuming fewer calories than she is expending, causing weight loss. Babies are dependant on their metabolic reserves until the onset of copious milk production. However, some babies do not have enough reserves and this can result in acute starvation-related complications. These complications can result in irreversible impairments in brain development. The term “starvation” is not intended to be inflammatory; it is a medically accurate diagnosis, the definition of which is explained below. 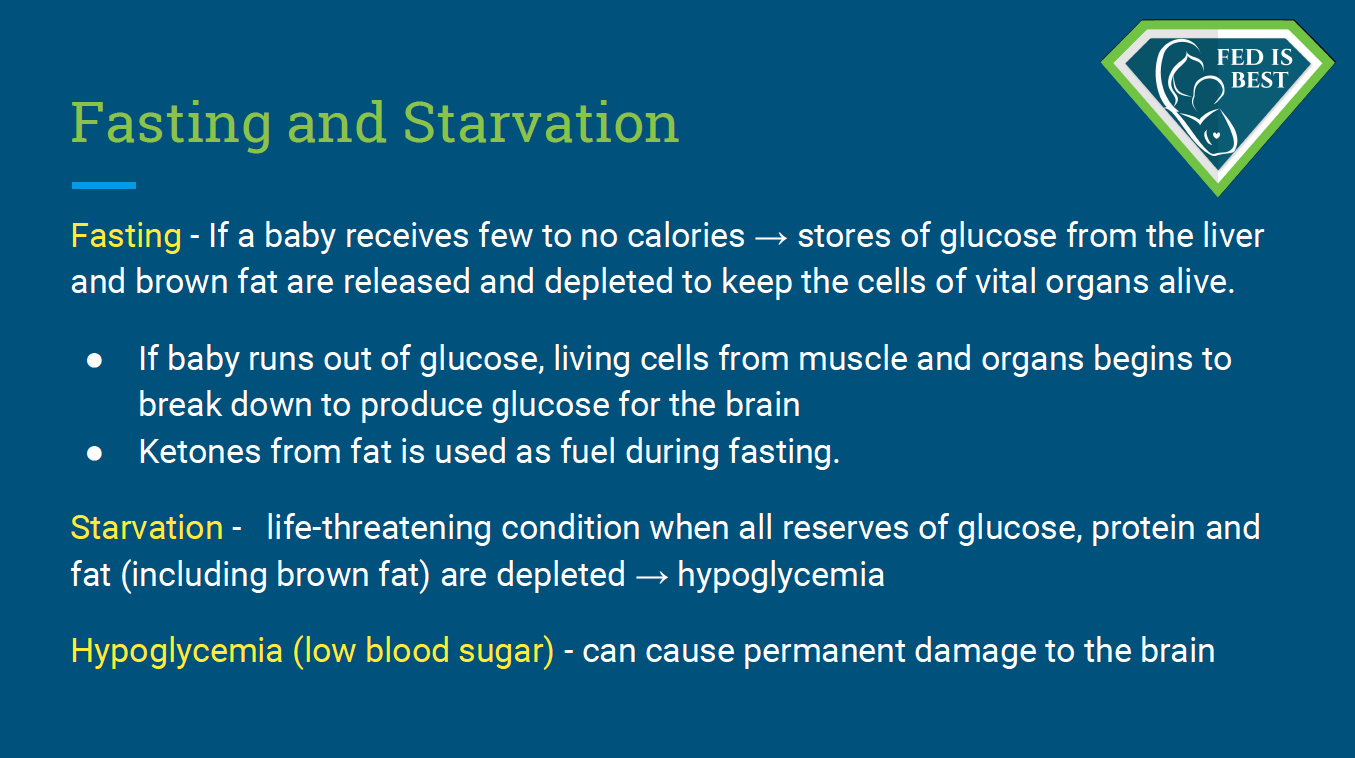 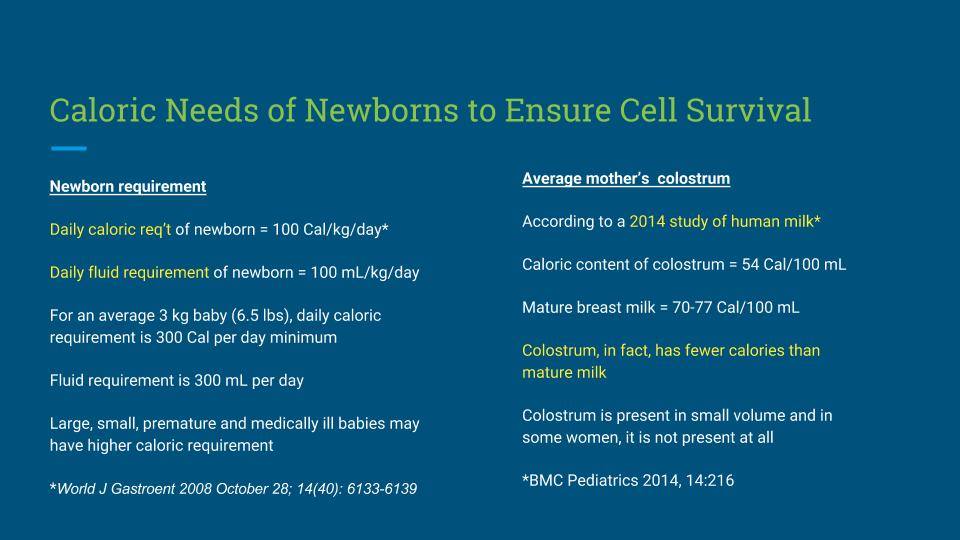 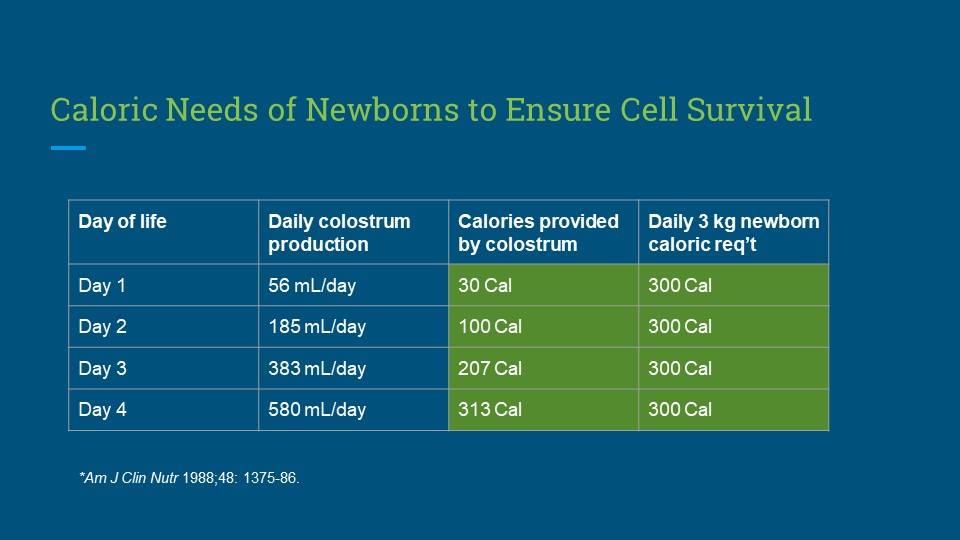 Beyond the first days of life, low breast milk production and the inability to produce a full milk supply are common.

The data show that maternal perception of insufficient breast milk and the onset of lactogenesis II is in fact accurate.  Listening to the mother instead of encouraging her to distrust her own instincts is critical to helping her reach her breastfeeding goals and maintaining her confidence.

Despite the lack of evidence using the gold-standard of randomized controlled trials (RCTs) showing that supplementation interferes with breastfeeding, health professionals and parents continue to be taught to avoid supplementation until an infant has developed or is at serious risk of insufficient feeding complications. In fact, six RCT studies have shown that in infants with weight loss above the 75th percentile, judicious supplementation with 10 mL (two teaspoons) of donor breast or formula milk after nursing had no effect on long-term breastfeeding, one showing it prevented hospital readmissions in all of the supplemented newborns.

It is unconscionable to scare mothers into withholding supplements while not disclosing the risks of insufficient milk.  Would we be even having this conversation if banked donor milk were available for all babies who needed temporary supplementation?

Because of this research, it’s imperative to assess each mother and baby to identify potential individual risk factors for delayed onset of lactogenesis II or low milk supply. This will help the health care team offer timely, temporary supplemental nutrition with banked donor milk or formula milk to prevent complications while providing optimal lactation management and support for identified high-risk dyads.  Additionally, the health care team can identify scant or absent colostrum in a high-risk mother through instruction on the manual expression of colostrum.

A comprehensive clinical exam/assessment by the pediatrician, nurse, and lactation consultant care team is necessary every eight hours to evaluate every newborn for safe and adequate intake while breastfeeding, and the mother’s observations should be part of the evaluation. The pediatrician, nurse, LC, and parents should have clearly defined roles in the treatment plan.

The health care team should be evaluating the newborn for:

All of the clinical markers must be within normal limits for a baby to be considered adequately fed.

The question is, how many randomized, controlled studies support Step 6 of the WHO’s Ten Steps to Successful Breastfeeding to avoid supplementation from birth in order to improve breastfeeding outcomes? None. Absolutely none.

From the World Health Organization 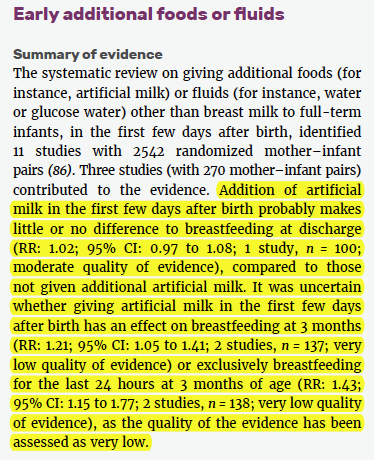 How did the very low quality of evidence turn into moderate-quality evidence for exclusive breastfeeding, particularly when the evidence showed improvement of breastfeeding rates in supplemented breastfed newborns?

Continue with FAQs Part 3 below:

FAQs Part 3: Do You Believe Exclusive Breastfeeding is a Good Goal to Promote?

FAQs Part 1: The Most Common Questions Answered At The Fed Is Best Foundation

How to safely breastfeed:

If I Had Given Him Just One Bottle, He Would Be Alive.