Boiling water for powdered infant formula preparation is one of the most conflicting and confusing topics for parents. Our governing bodies such as the CDC, WHO, WIC, AAP and FDA, all have varying recommendations for preparing formula.

Seventy-five percent of infants in the US will receive some infant formula by 6 months of age. Safe infant formula preparation education is very important to ensure babies are fed safely for optimal growth and health outcomes.  Parents have shared some of the educational materials they received for formula preparation, and there were vast differences ranging from a one-page handout to a complete step-by-step instruction booklet. Most parents said they were not told to boil water.

Infant formula products in the US have the most rigorous regulations in the world. In 1980 Congress passed the Infant Formula Act and the 1986 Amendment which, along with the current edition of the Infant Formula Program, established nutrient requirements for all infant formulas. The American Academy of Pediatrics’ Committee on Nutrition develops the nutritional standards and are used by the Food and Drug Administration to develop infant formula regulations.

The Infant Formula Act of 1980 is one of the most specific and detailed acts ever passed by Congress. It establishes nutrient requirements, defines adulteration, provides for establishing nutrient and quality control procedures, prescribes recall procedures, and specifies inspection requirements.

The Food and Drug Administration (FDA) monitors the manufacturers of infant formulas. They have a lengthy list of requirements found here. Nutrient content, nutrient quantity, nutrient quality control and assurance, sampling, labeling, handling, and microbiological analysis are required for every batch made.

The shipment of infant formula has specific regulations that range from packaging, wrapping, and stacking during transit.  An official inspection certificate number is also required to ensure they are safe before reaching the consumer. There is mandatory monitoring and recalls for any complications related to formula.

For comparison, the required components for formulas internationally are set by the Codex Alimentarius, a joint food standards program overseen by the Food and Agriculture Organization of the United Nations and WHO. Individual countries can also set additional guidelines.

There are Three types of formula products available

If infant formula is tightly regulated and tested for Cronobacter and Salmonella what is the purpose of boiling water?

Boiling water is not about making the water source safe, it’s about killing any potential pathogens in the formula powder itself. According to the Food and Drug Administration (FDA), formula powder is always tested for Salmonella and Cronobacter before distribution, but it is not sterile. It can become cross-contaminated at home from unclean hands, the formula scoop, from unclean surfaces when preparing the formula, formula storage, and usage after the expiration date.

Feeding babies is critically important for optimal health outcomes. There are many factors to consider when preparing infant formula, and safety is of utmost importance. Formula-fed babies are consuming nothing but formula during a critical period of rapid growth and development.

According to the CDC, Cronobacter (which used to be called Enterobacter sakazakii) is a germ that can live in very dry places. Cronobacter has been found in dry foods, like powdered infant formula, powdered milk, herbal teas, and starches. It has also been found in sewer water. Cronobacter infections are often very serious—even fatal— for babies.

Thankfully, Cronobacter infections are very rare.  The CDC receives reports of four to six infant infections per year in the United States. Babies who are less than 3 months old, premature, and/or immunocompromised are especially vulnerable to this bacteria because of their immature immune system, and they may not be able to fight off the infection even with the best modern medicine.

Boiling water guidelines contradict each other 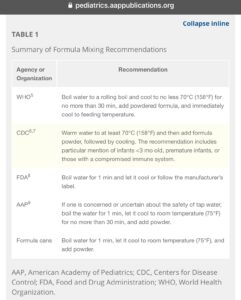 What are the authors’ concerns?

According to Baby-Friendly USA, parents who deliver their babies in their accredited hospitals and are formula feeding are required to receive educational guidelines for formula preparation from the WHO. The WHO has the most rigorous and cumbersome guidelines and the authors question if they are based on developing countries that do not have a clean water supply or adequate refrigeration.

The WHO’s recommendation has 12 steps for one bottle preparation, and boiling water 8 or more times a day to prepare a formula bottle greatly increases the risks for burns in comparison to the rare Cronobacter infections.

Every day, 300 young children are taken to the emergency department for burns caused by hot water.  The US has the highest rate of burns in the industrialized world, and burns are the second leading cause of death for children less than 5 years of age.

Are We Doing More Harm Than Good with the WHO recommendation?

A risk–benefit analysis is necessary to develop evidence-based recommendations for safe infant formula preparation. Parents in the US have access to refrigeration and clean water, so they can prepare a batch of formula once daily and store it safely for 24 hours while lowering burn risks.

Our recommendations for preparing powdered formula:

Wash Hands And All Feeding Supplies

Cool The Formula and Feed

What about the powdered formula where manufacturers’ directions say to not boil the water?

Boiling water will inactivate probiotics in the powder. Ready to feed formula has intact probiotics. 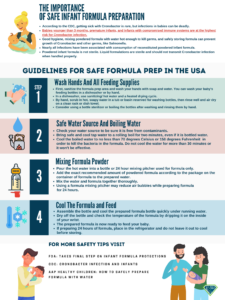 To join our parent support group: