This story is an excerpt from KayLee of The Happily Average Blog, a mother who bottle fed her
daughter and breastfed her son after birth. You can read the full story here.

When I had my daughter it was three days after my eighteenth birthday . I WAS A BABY having a baby. I was very inexperienced, obviously.

My Lilah was born three weeks early, after a complicated pregnancy . She was small, and from the very get-go I wasn’t producing milk. I mean nothing, not even a little. My body just didn’t kick into gear to feed my baby.

And this broke my heart.

I was in the hospital for several days because they wanted to monitor us and during that time they just kept having me try to breastfeed, so I kept trying and she wasn’t getting any food in her at all. There was nothing.

I wasn’t producing anything , so I was panicking. At this point it had been 2 days and they kept telling me: oh she doesn’t need formula, just keep trying to breastfeed, just try this position, just drink more water. So I did.

And it didn’t work.

Later that day, after a ton of protesting they finally went ahead and set me up with a formula supplementing tube that ran down into a breast shield. The hope was that she would get the feel of feeding and maybe it would give me time to start producing.

This also did not work.

We went home and i continued to do everything I was told. But despite my efforts, I still couldn’t breastfeed my baby.

The realization that I couldn’t breastfeed along with the other insecurities of being a mother at barely eighteen really broke me down emotionally. I tried for 2 months. I went to the counselors and nurses, I read all the books. I tried and tried and tried and failed. It was heartbreaking for me because I thought that I was failing as a mother.

At 18 years old, being a single young mother trying to navigate my way, and having people that I was supposed to trust for advice shame me for not being able to breastfeed my daughter was horrible. I remember crying several times, just feeling generally sad and trying to figure out why I couldn’t do it when other people could do it. If I was a mother, I should be able to do it !

That was my first experience. In that case I did not have a choice. With my second child, I did.

When I gave birth to my son the experience was the total opposite from his sister. He was a week late, very strong, and I was already producing. He latched right away and he was a natural born eater. He breastfed and breastfed and breastfed as much as one person could tolerate! He wanted to be attached to me 24/7, so we did that. I breastfed constantly. It was extremely painful and extremely uncomfortable, and  at the same time magical and heartwarming. So we kept going .

He was eating very well and I loved the bonding, except that first few seconds when he latched was a murderous shocking pain. I was eating lactation cookies, I was taking fenugreek, I was doing everything that could be done to keep my supply up. I really wanted the chance to breastfeed this time…so I did this for five months before I chose to stop breastfeeding . My son was starting to get the signs of teething and though some people feed through teething I was not interested in that. I then chose to stop breast feeding.

Now that I’m a little older and a little wiser. I really don’t feel that it makes a difference how a woman chooses to sustain her baby. I’m a supporter of feeding your baby any way you need (or want) to feed your baby.

So. lets just let that mama feed her baby! 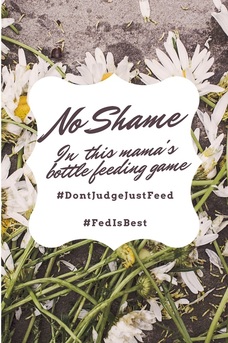 As long as that sweet baby is eating I think that mothers deserve all the support in the world for doing their job and sustaining their child. So how about we raise each other up, instead of shaming each other over our child-rearing choices?

Breastfeeding is great it’s wonderful and its beautiful. Its also a fact that not every woman CAN do it or wants to do it. I loved the experience but on the other hand I don’t feel that I’m any lesser of a mother for choosing to bottle feed my son or for having to bottle feed my daughter.

So, long story short let’s support each other ladies. I would love to see some of you posting with #dontjudgejustfeed and with #fedisbest .

KayLee is a mother of two, a book lover, and a dedicated public servant who lives in Washington State and blogs about the wonders of being a Happily Average Mom and finding comfort from within. She’s proudly not “super crafty mom” or “super fit mom” or “super career mom” – but is just a “Basic Average Mom” who does her very best… and is learning that that’s enough. You can follow her blog at The Happily Average Blog or find her on Twitter as @HappilyAverageK.