Deprecated: class-oembed.php is deprecated since version 5.3.0! Use wp-includes/class-wp-oembed.php instead. in /var/www/wp-includes/functions.php on line 4903

I have three beautiful children: one nearly three year old boy, and one set of boy/girl twins, who are just three weeks old. If I could go back and change my eldest son’s first feeding  experiences on this earth, I would. I would have been happier and my baby healthier if he had just been fed while attempting to exclusively breastfeed.

When I was pregnant with my eldest boy, I fully intended to breastfeed him. We were delivering in a Baby-Friendly Hospital. I had never heard the term “Baby-Friendly” before becoming pregnant, but when my husband and I attended the hospital tour, we were told that the Baby-Friendly label meant that the hospital had achieved what was considered the gold standard in breastfeeding support. We attended the available lactation, birth, and parenting courses at the hospital. Whenever I was asked if I was planning to breastfeed my son, I proudly said, yes, I would. I was 34 years old, and I had never really considered infant feeding practices before becoming pregnant. From the information presented, it was obvious that breastfeeding was optimal.

I was told that babies did not need very much food in the first days of life. I was told that I would always make enough to feed the baby. I believed that the information I was receiving in these courses was truly the gold standard.

My son was born naturally after an unmedicated labor. He was placed on my bare chest, latched and I was told that we were doing great. I would nurse him and then he started screaming after each nursing session. Later, I learned that newborns aren’t meant to continuously scream after attempting to feed. They are meant to be satisfied and then sleep. The crying and screaming means something is wrong. I did not realize that my colostrum might not be enough to keep him fully fed before my milk came in. If I was informed that different babies have different caloric requirements at birth, and that my colostrum might not be enough right away, I never would have consented to not feeding my newborn for any period of time.

We were moved to the maternity ward and he nursed very often and it never settled him. Sometimes, he fell asleep, but I think now that my son was exhausted from trying to feed without taking in enough calories. If I was told in my hospital lactation class that my son would burn more calories trying to feed constantly then he would get from my empty breast, I never would have chosen to exclusively breastfeed him before my milk came in.

If I had been fully informed, I would have chosen to supplement after the first breastfeed.

His first night, my son tried to feed continuously for several hours. He did not settle or sleep. Nurses came in to check on how nursing was going hourly. They had all received specialized training to assist with lactation issues, as we were proudly told by hospital staff in our classes and on our tour. Every time they came in the room, I told them how much he was feeding and they told me that I was doing a great job and to keep going. They told me that the more I nursed him, the sooner my milk would come in.

If they had told me that as a first-time mother, I might not make enough milk to satisfy my baby for several days no matter how much I tried to breastfeed, I would have supplemented him as soon as he needed me to. 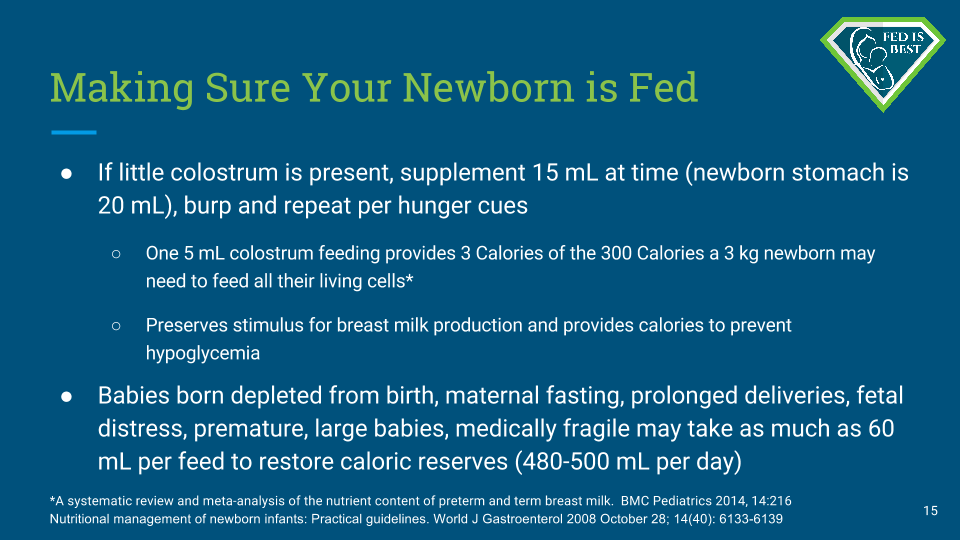 After hours of near constant breastfeeding, I noticed that not only could I not see any colostrum or milk, but that I was feeding my baby only blood from my breast. At that point, I called the nurses to come and give him a bottle. A couple of nurses came by without the bottle, and reminded me that giving him a bottle now would interfere with our breastfeeding relationship. I was made to feel like I was doing something bad for my baby, so I started to cry. I didn’t want to feed him blood and nursing had become extremely painful. I made them bring a bottle anyway. 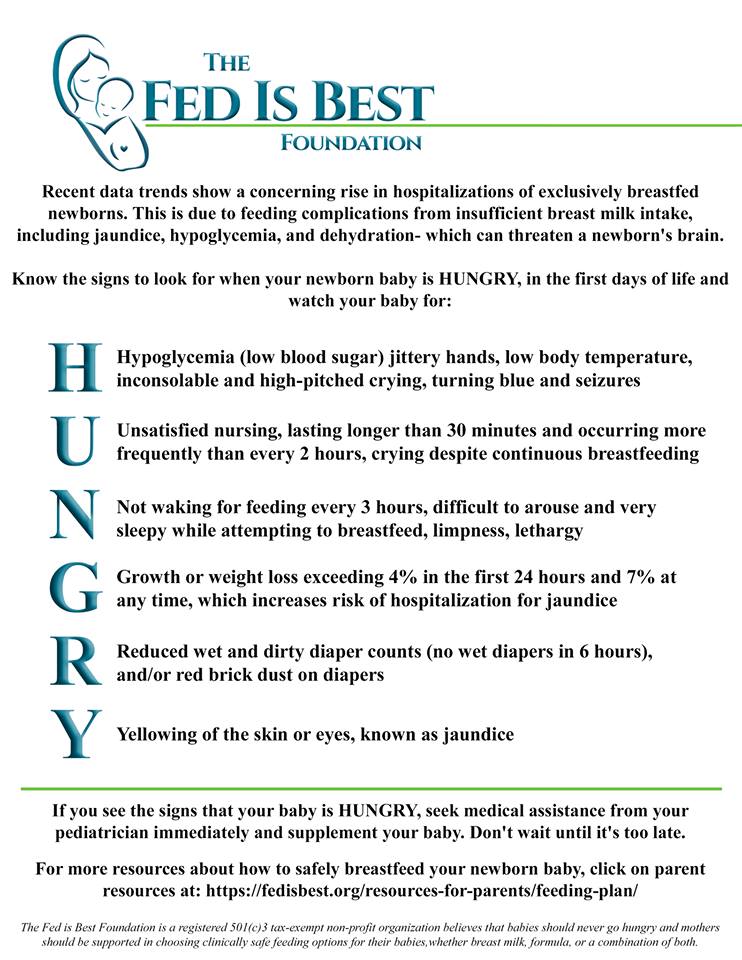 When I went home 48 hours after birth, I continued to try to nurse my son and supplement as little as I could. My milk did come in fully four days after birth,  but it never stopped being extremely painful-intolerable.  I was scared of feeding him blood, so I got a pump as quickly as I could, but I couldn’t keep up with breastfeeding and pumping and supplementing. In the end, I stopped. We were a formula-only family. My boy, who was born in the 25th percentile of height and weight, shot up to the 90th and 95th percentiles by six months. He was a hungry boy because he was just meant to be big.

When we planned to have a second child, I thought I was ready to try breastfeeding again. But then there was a surprise for us – we were having twins. By now I had learned that the proven short-term benefits of breastfeeding were limited.  I had only breastfed my son for a few short weeks and I didn’t have an emotional attachment to the concept of breastfeeding. I was sad when I stopped, but I had been miserable while doing it. Because I didn’t feel successful the first time around, I decided I didn’t want to try it again, with the same lack of support and with a more complex situation.

The twins were born via cesarean section at 35 weeks gestation. Our daughter came first, followed one minute later by our second son. They both weighed precisely 2310 grams. As late preterm infants, they were sent to the Special Care Nursery, where they spent their first twelve days. I was able to hold them briefly before they were taken to the nursery with my husband. 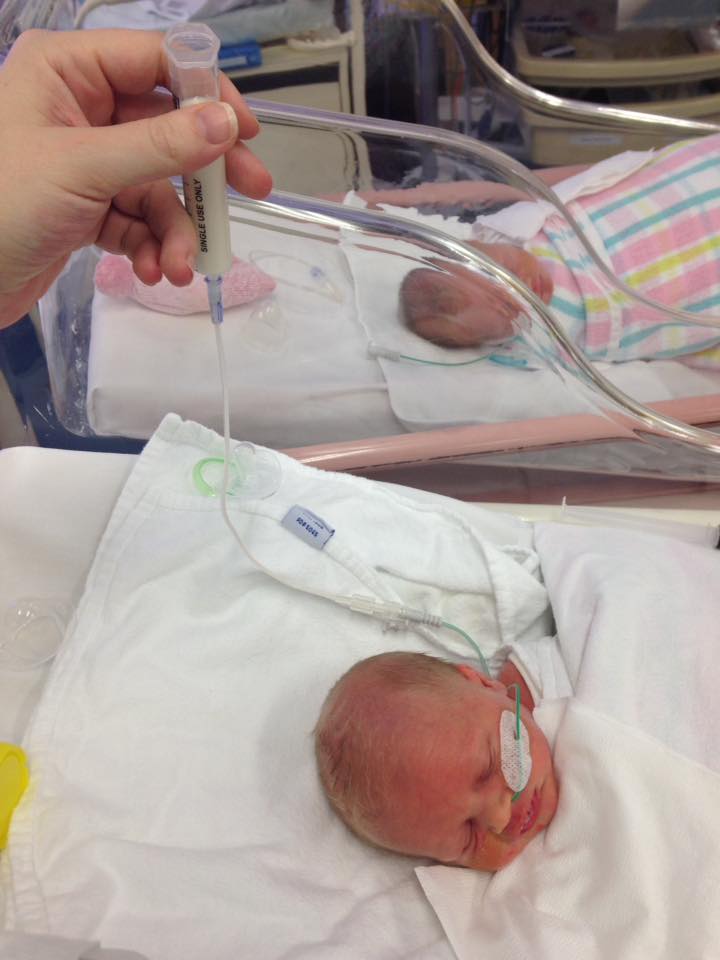 They spent a little time warming in their isolettes, and received their first feeds of preterm (high calorie) infant formula via nasogastric tubes. My husband and I held the syringes that fed them, and slowly we were able to feed them an occasional bottle, then we switched between bottles and tube feeding every three hours. The pediatrician explained that they were conserving their energy – the babies’ sucking burned nearly as many calories as they were taking in. I knew that already. They spent twelve days in the SCN. My preterm twins received more formula per feeding than my full term baby. I knew it was their carefully monitored and tracked full tummies that kept them safe, sleeping, and growing well.

Their small, preterm tummies couldn’t hold very much food, but they were being fed much more than my eldest was in his first day of life, despite his near-constant attempts to feed.

For my babies, Fed Is Best.

Please consider donating to promote our educational outreach efforts of the Fed is Best Foundation, please go to our Donation Page and receive a free Fed is Best charm or button. All donations are tax deductible.

If you wish to help parents learn how to protect their newborns from accidental starvation, please share this story and sign our petition to demand that the CDC, the AAP, the U.S. Surgeon General and the WHO/UNICEF Baby-Friendly Hospital Initiative warn parents about the dangers of newborn and infant starvation from insufficient exclusive breastfeeding. Go to https://fedisbest.org/sign-our-petition/.