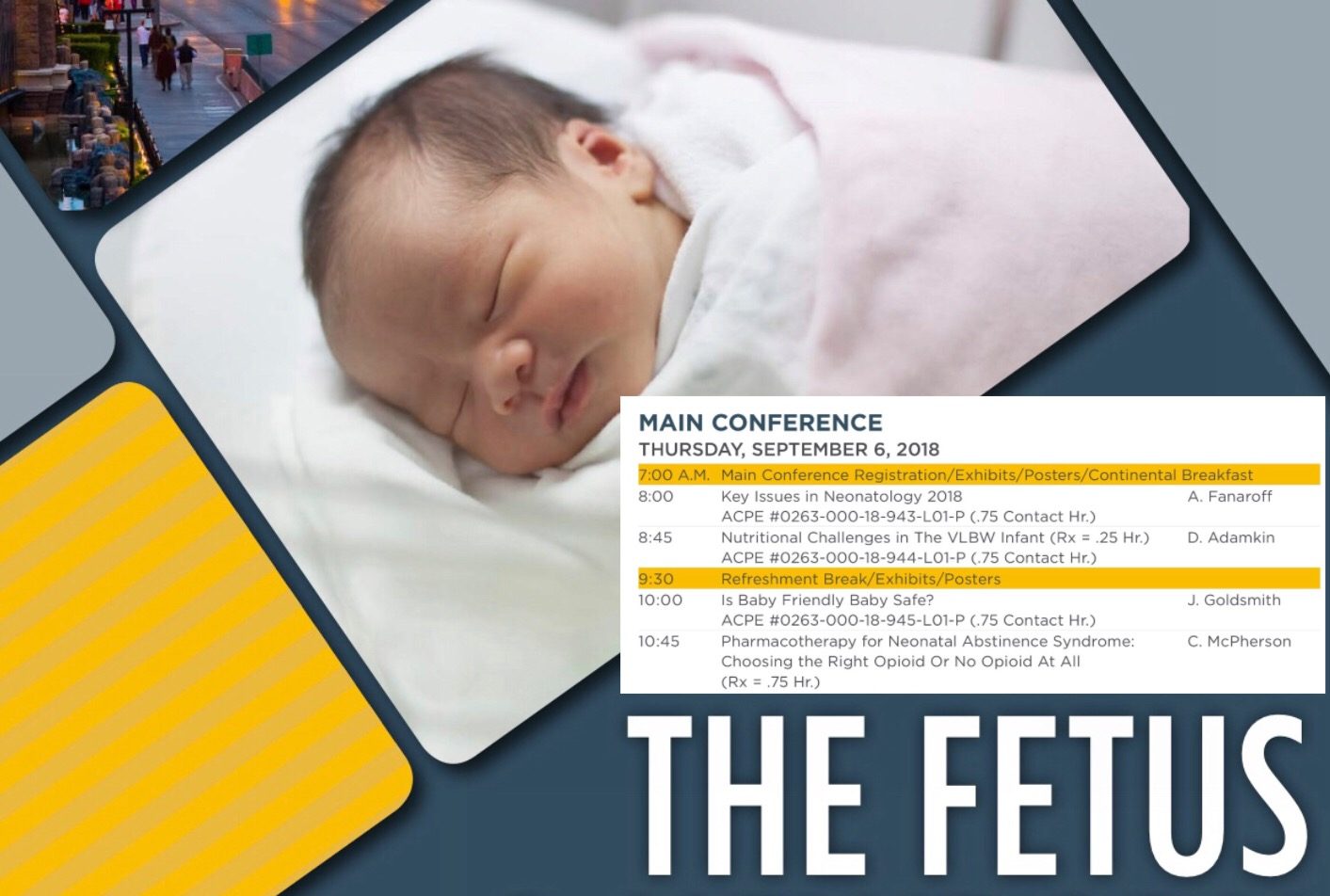 Las Vegas, Nevada — On September 6, 2018, the national neonatology conference, “The Fetus and Newborn Conference” was held in Las Vegas, Nevada. Among the speakers was Jay Goldsmith, M.D., Neonatologist and Professor of Pediatrics at Tulane University, Member of the American Academy of Pediatrics Section on the Fetus and Newborn who gave a talk entitled, “Is Baby-Friendly Baby Safe?” 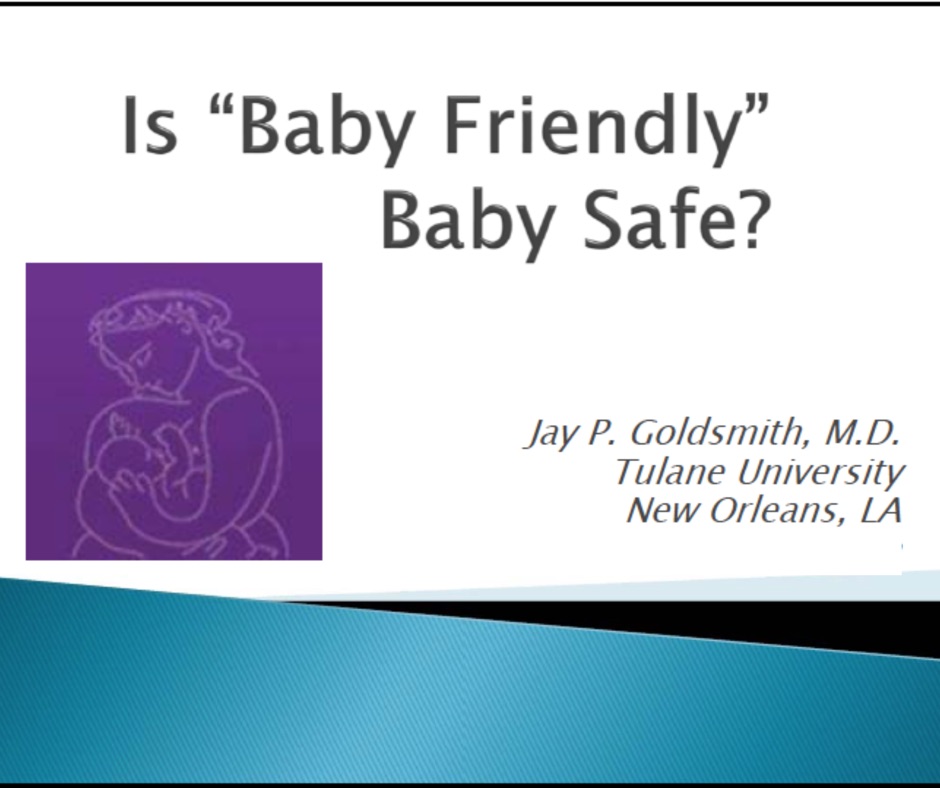 In the talk, he discussed the case of an Oregon woman who has filed an $8.6 million lawsuit against her hospital, Portland Adventist Medical Center, and a nurse who cared for her and her baby after accidentally suffocating her newborn after falling asleep with him in her hospital bed. According to the Washington Post, she had delivered her son by cesarean section a few days earlier and was given narcotic pain medication and sleep aids. A nurse gave her newborn to her while she was still drowsy and groggy to breastfeed in her hospital bed. About an hour after being left to breastfeed, the baby was found gray, not breathing with compromised vital signs in the mother’s arms after which he was rushed to the nursery. The baby received CPR and was put on life support but the child sustained severe and permanent brain injury. He ultimately died at 10 days of age.

Dr. Goldsmith subsequently cited the promotion of skin-to-skin care and rooming-in under the WHO Ten Steps to Successful Breastfeeding, core elements of the Baby-Friendly Hospital Initiative, as key factors leading to cases of Sudden Unexpected Postnatal Collapse (SUPC), newborn falls from bed and other medical problems. Skin-to-skin care involves placing the naked infant directly in contact with the mother skin in a prone position immediately following birth for one hour and frequently during the course of the hospital stay. This is typically recommended in healthy term newborns and even some late preterm newborns. 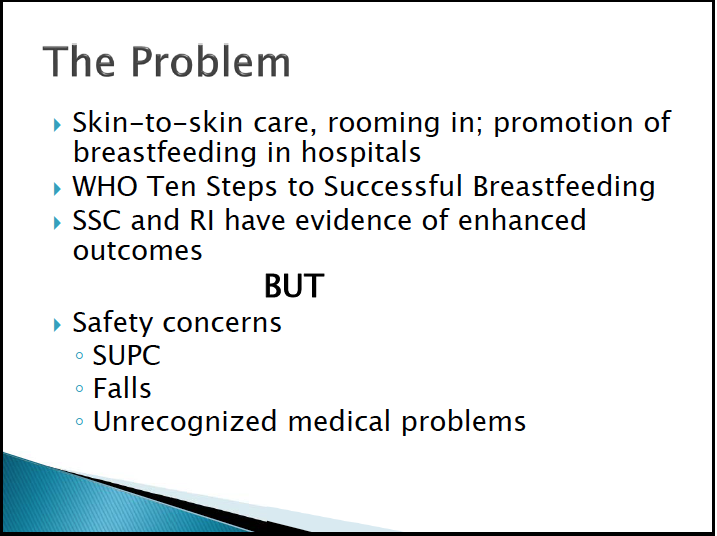 He reviewed multiple articles published in peer-reviewed journals criticizing the Baby-Friendly Hospital Initiative policies. One critical review of the BFHI published by Gomez-Pomar and Blubaugh in the Journal of Perinatology concluded that the 10 Step program is “in urgent need of an update” and that it was problematic to regard it as best practice. The author recommended other options to improve policies for increased and sustained breastfeeding. Another editorial written by Bass et al in JAMA Pediatrics also criticized the BFHI policies as unintentionally promoting unsafe sleep practices that result in cases of SUPC and infant falls from bed. In addition, the policy discourages pacifier use, which have protective effects against SIDS. They advocated against “overly rigid insistence” on following the Ten Steps. 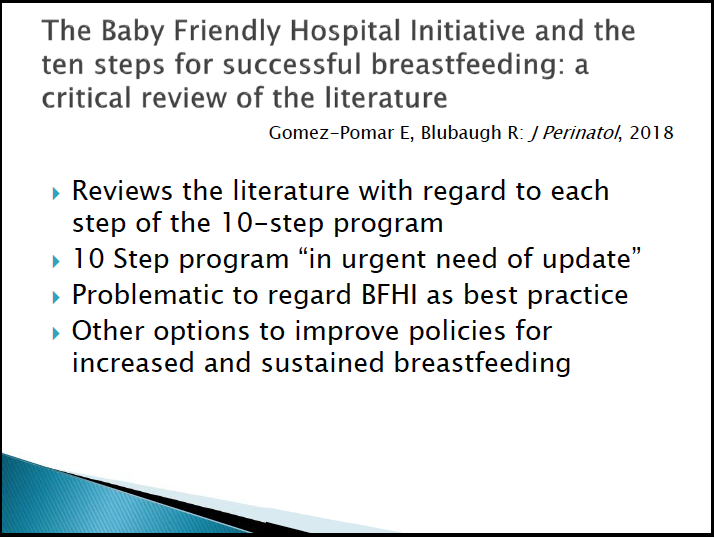 He subsequently reviewed multiple published articles on deaths and near-deaths of newborns where the  key factor was early skin-to-skin contact without adequate staff supervision to monitor infant breathing. He noted that many cases occurred when mothers accidentally fell asleep but a few occurred while she was awake and unaware of her child’s compromised breathing. Half of the cases resulted in death and the other half resulted in severe and permanent brain injury. Key risk factors found in the literature were babies born to first-time mothers, mothers who are breastfeeding, babies found in prone position and unattended by staff. The articles reviewed are listed below. 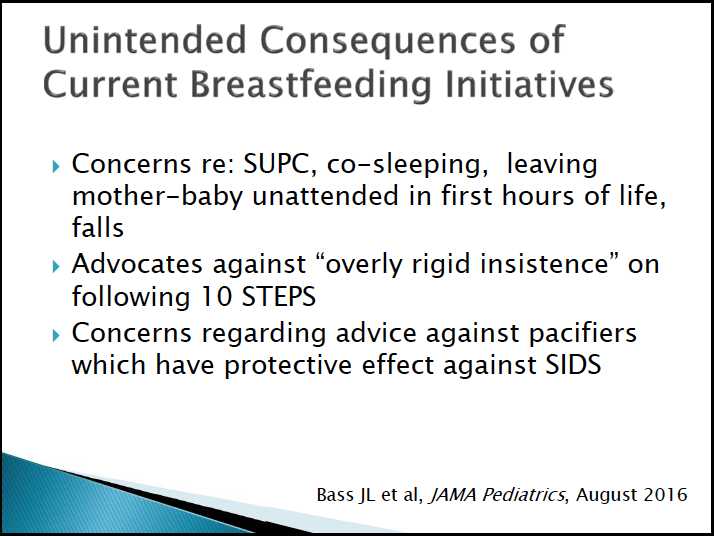 Dr. Goldsmith subsequently summarized key issues contributing to SUPC including maternal exhaustion after delivery, impairments from sedating medications, insufficient monitoring by trained staff to monitor infant breathing. He recommended balancing safe sleep with skin-to-skin care and increased maternal education on the risks of bed sharing. Newborns requiring resuscitation, born with low Apgar scores, late preterm newborns, and newborns with difficult or cesarean deliveries are particularly high risk for SUPC during SSC. He also reviewed the components of safe positioning during skin-to-skin care.  Finally, he discussed the safety issues related to 24/7 rooming-in as it contributes to maternal exhaustion and impairment, particularly among mothers being treated with sedating medications. Strict enforcement of rooming-in can subsequently result in mothers falling asleep with the baby in bed leading to SUPC and infant falls from bed.

The American Academy of Pediatrics has published a guideline entitled Safe Sleep and Skin-to-Skin Care in the Neonatal Period for Healthy Term Newborns, a joint collaboration of the Committee on the Fetus and Newborn and the Task Force on Sudden Infant Death Syndrome. This policy outlines the safety concerns regarding the Skin-to-Skin Care and Rooming-In policy of the BFHI and outlines how to minimize risk of SUPC and accidental infant falls, including recommendations for monitoring and safe positioning during breastfeeding and skin-to-skin care.

During the question and answer session that followed, according to a conference attendee reporting to the Fed is Best Foundation, Dr. Goldsmith noted concerns regarding the push to “increased the allowable weight loss” for newborns as contributing to newborns developing hypoglycemia, hypernatremic dehydration and seizures. According to the conference attendee, Dr. Goldsmith noted that Baby-Friendly USA has received over $6 million in certification fees alone while, as his presentation outlined, the policies remain questionable and potentially unsafe.

Meanwhile, multiple hospitals have had to shoulder the cost of multi-million dollar lawsuits related to infant deaths and injuries caused by BFHI policies, while Baby-Friendly USA continues to credential hospitals whose administrators may be unaware of the safety issues and the risk of litigation from such complications. Since 2016, 58 hospitals previously listed as Baby-Friendly certified have relinquished their certification including multiple hospitals from the Kaiser Permanente and the Texas Health systems.

News of safety concerns regarding strict implementation of the BFHI and the Ten Steps to Successful Breastfeeding is continuing to spread as hospitals, doctors and nurses are named in lawsuits for injuries of newborns harmed from SUPC and hypoglycemic, hypernatremic and hyperbilirubinemic brain injury due to insufficient early exclusive breastfeeding. Meanwhile, hospitals are continuing to be recruited without sufficient knowledge of the safety issues of the BFHI policies or adequate training on the prevention of SUPC and insufficient breastfeeding complications that result in newborn injury.

Thousands of mothers have written the Fed is Best Foundation. They have shared their stories of infants being made to go hungry even to the point of hospitalization and permanent harm due to strict adherence to Baby-Friendly practices. Alicia has written a letter to all obstetric health care providers and hospitals asking them to prioritize safety when counseling mothers on infant feeding. Please follow the link to read her letter.

Next: Open Letter from Mother