We regularly receive messages from nurses, physicians, LCs and other health professionals. They express their concerns while asking for help and patient resources. They tell us their stories and they need support and direction of what to do about unethical and dangerous policies they are forced to practice. We collected their stories and are beginning a blog series of health professionals who are now speaking out about the Baby-Friendly Health Initiative and the WHO Ten Steps of Breastfeeding.

Mothers were expected to assume full responsibility for their babies and themselves while they were recovering from birth. Mothers were profoundly exhausted and would fall asleep in bed holding their babies. I was taken aback at the number of crying breastfeeding babies who were hungry. To meet the metrics of exclusive breastfeeding rates (80%), we could not supplement the babies and our goal was to get them discharged as exclusively breastfeeding.

Now I know why the emergency department admissions have climbed significantly for hyperbilirubinemia, hypernatremia, hypoglycemia, and seizures. I have worked in a pediatric emergency department for 20 years, and I am appalled at the lack of comprehensive breastfeeding education that is provided to mothers. They are not taught about the signs that their baby is not getting enough milk. These parents are GOOD parents and were following their breastfeeding education guidelines. It’s pure insanity!

I took care of two babies who died needlessly from complications of acute starvation. One baby had a glucose level of 14, sodium level of 160, and was seizing. We did everything we could to save the baby, but it was too late. Her parents were failed by the current breastfeeding education, which is based on the BFHI/WHO Ten Steps. The other baby was stabilized in the ED and was transferred to the PICU [pediatric intensive care unit] only to die the next day.

I think, from a pediatric emergency perspective, there are potentially under-reported incidences of infant harm and deaths related to strict exclusive breastfeeding. We link newborn deaths to smothering in mom’s arms but don’t link it to her exhaustion. The same can be said about infants with fractured skulls due to a fall from bed when a mom falls asleep breastfeeding. Now it turns out these policies don’t even improve breastfeeding rates after they are discharged.

Exclusive breastfeeding of newborns is now identified as the leading risk factor for newborn rehospitalization, which occurs to 1 in 25 to 1 in 71 previously healthy, term newborns.

I have been a registered nurse for 35 years.  I began my career working in L&D [labor and delivery] and then in the newborn nursery and NICU [newborn intensive care unit]. Over the years, maternity protocols have changed according to the updated scientific evidence and I saw mostly positive clinical outcomes. However, when our breastfeeding policies and protocol were changed, I wasn’t prepared for the devastating outcomes for the babies, mothers, and nurses!

The hospital where I was working was converting to become a Baby-Friendly hospital (BFHI).  We were re-educated according to the BFHI protocol. Some of the things that changed:

Our NICU had a significant increase of “bili baby” admissions as a result of not getting enough milk, and we had many babies readmitted for excessive weight loss, dehydration and jaundice after they were discharged.

We had a lactation consultant who would get very confrontational with the nurses if we told a mom it was okay to supplement. The nursery was basically closed except for sick jaundiced babies, and the nursery nurses were forced to find different jobs. Moms who had c-sections and were exhausted and recovering from surgery had to keep their babies in their rooms. If they did request to send their baby to the nursery or give up on breastfeeding, they were put on a guilt trip and told they “needed to learn hunger cues.” Moms who had delivered vaginally were expected to keep their babies as well.

I had to sneak formula to many moms who were asking to supplement. When the nurse manager questioned them about why their baby was supplemented, they would say they “demanded it” so I would not get in trouble. I cannot tell you how many moms thanked me. I began to feel crazy when my hospital was basically threatening me to adhere to these dangerous policies, especially when I knew it was causing harm to babies.

The last straw for me was when I almost lost a preemie while doing skin to skin. The mom put the baby straight to the breast after delivery. Nurses are not able to do a proper assessment while doing skin-to-skin. I did the initial assessment and checked the baby, and within five minutes the baby was limp, blue, and not breathing. He was suffocating on the breast. I resuscitated the infant but it was a very close call.

When we were expecting the Baby-Friendly review visit to our hospital, we were warned that we must follow the text script. It was sickening. I had to get out and refused to be part of a dangerous policy. Six very experienced nurses left in a year’s time. I was one of them. 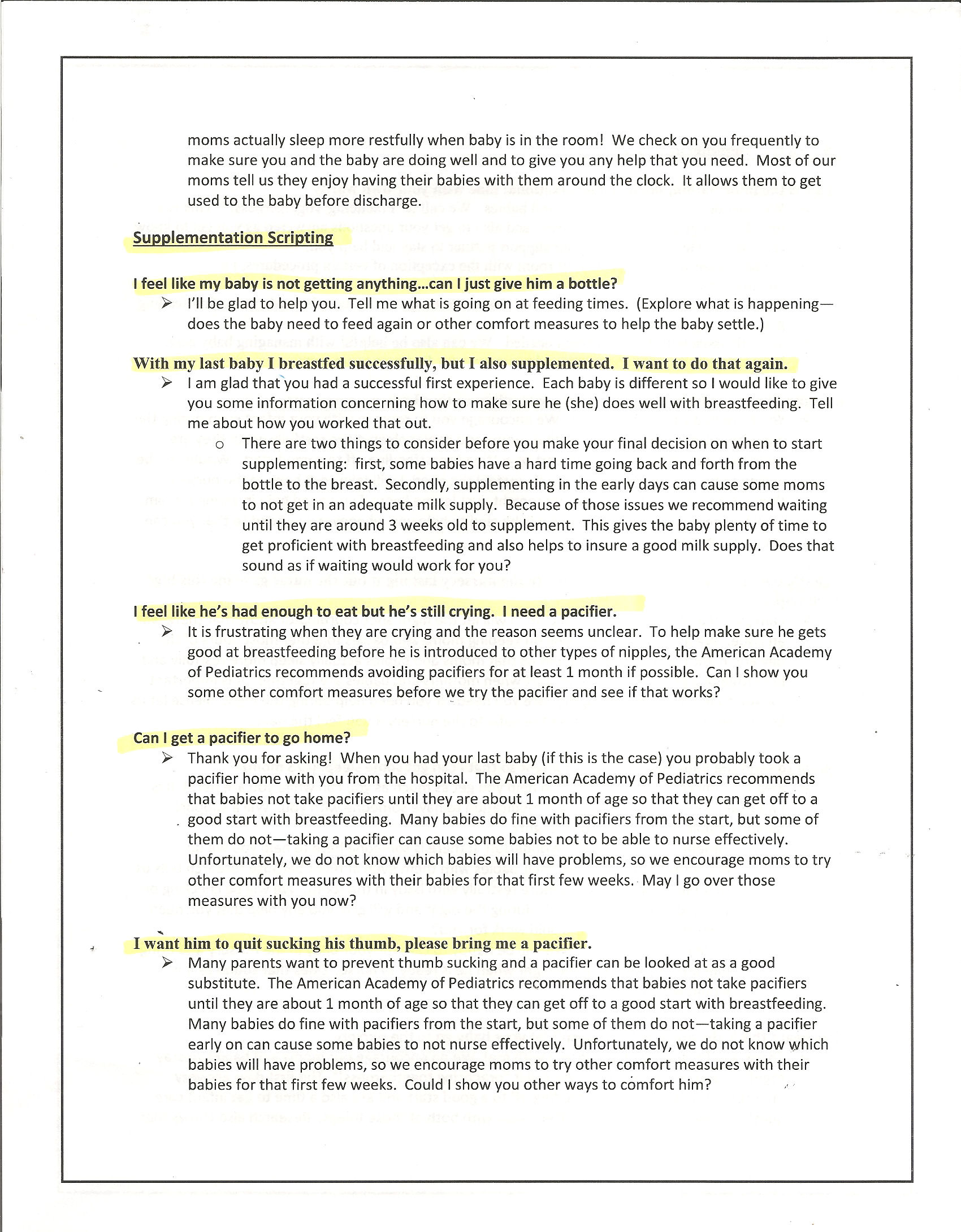 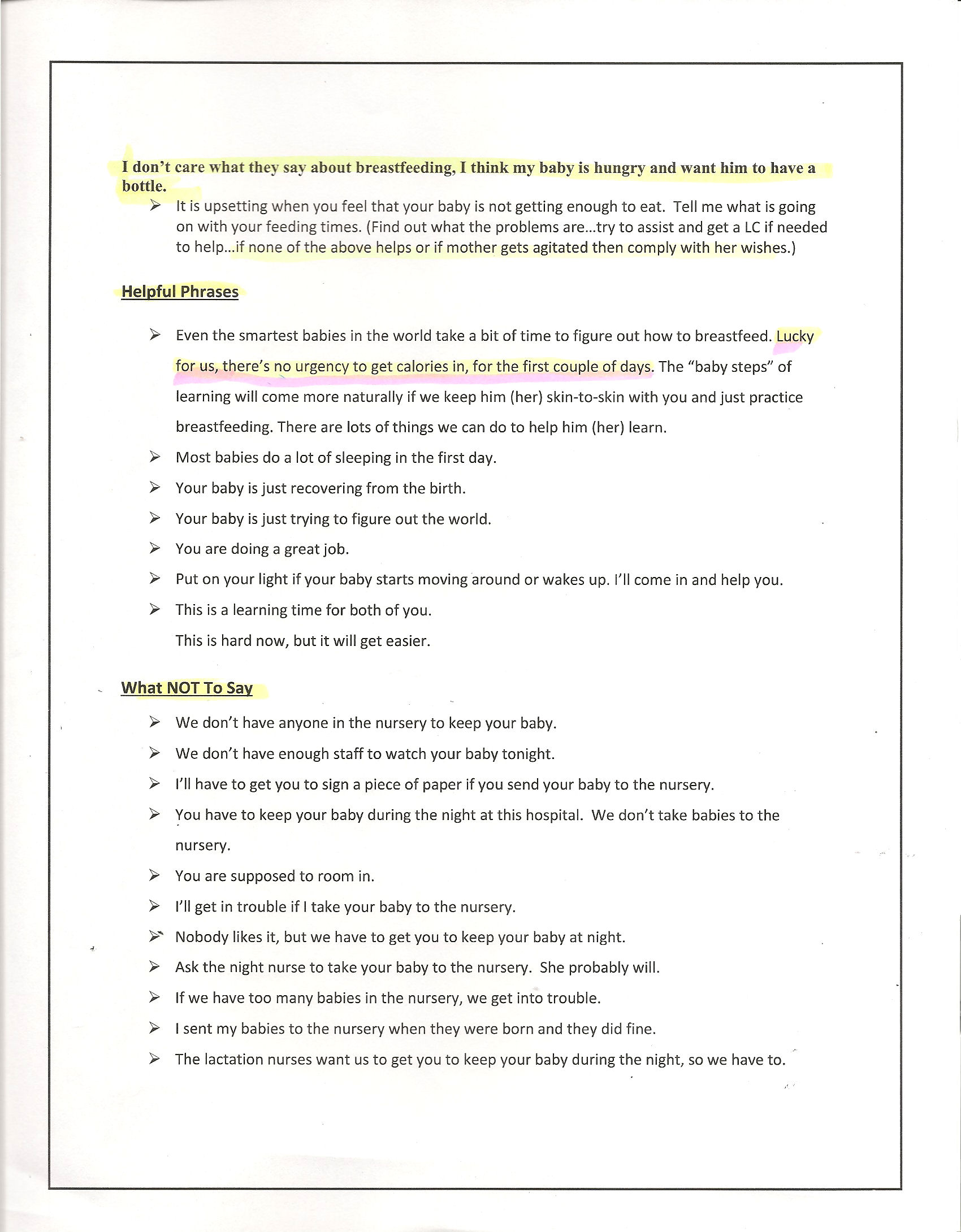 If you are a health care professional, please consider joining us by clicking here 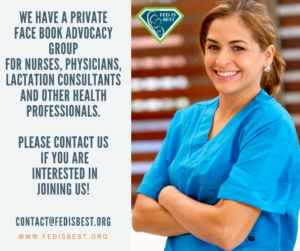