Multiple health organizations recommend exclusive breastfeeding from birth to 6 months as the ideal form of feeding for all babies under the belief that all but a rare mother can exclusively breastfeed during that time frame without underfeeding or causing fasting or starvation physiology in their baby. In order to suggest that exclusive breastfeeding is ideal for all, if not the majority of babies, one would expect the health organizations to have researched and confirmed that all but a rare mother in fact produce sufficient milk to meet the caloric and fluid requirements of the babies every single day of the 6 months without causing harmful fasting conditions or starvation. There have been few studies on the true daily production of breast milk in breastfeeding mothers.  Only two small studies quantified the daily production of exclusively breastfeeding mothers including a study published in 1984, which measured the milk production of 9 mothers, and one in 1988, which measured it in 12 mothers.  After extensive review of the scientific literature, it appears the evidence that it is rare for a mother to to not be able to produce enough breast milk to exclusively breastfeed for 6 months is no where to be found. In fact the scientific literature has found quite the opposite. 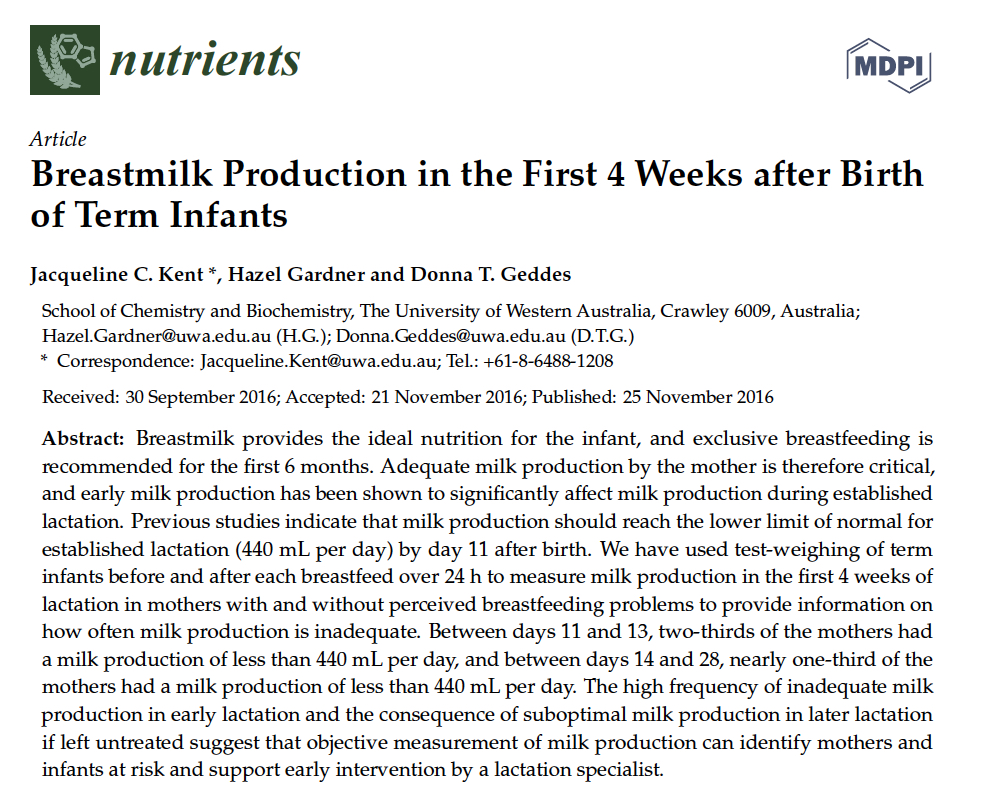 In November 2016, the largest quantitative study of breast milk production in the first 4 week after birth of term infants was published in the journal Nutrients by human milk scientists, Dr. Jacqueline Kent, Dr. Hazel Gardner and Dr. Donna Geddes from the University of Western Australia. They recruited a convenience sample of 116 breastfeeding mothers with and without breastfeeding problems who agreed to do 24 hour milk measurements through weighed and pumped feedings between days 6 and 28 after birth and were loaned accurate clinical-grade digital scales to measure their milk production at home. The participants test weighed their own infants before and after breastfeeding or supplementary feeds and recorded the amounts of breast milk expressed (1 mL = 1 gram). All breast milk transferred to the baby, all breast milk expressed and all supplementary volumes were recorded as well as the duration of each feed.

These were the results…

Based on the 440 mL cut-off for “sufficient” breast milk production, some mothers who report their babies not getting enough in fact produced more than 440 mL.  However, since 440 mL is the amount of milk that is needed to meet the minimum caloric requirement of a 3 kg newborn, if the mother had a newborn weighing > 3 kg as they would expect to be past the first days of life if growing appropriately, many of the mothers reporting breastfeeding problems may be producing more than 440 mL but are still in fact producing less than the amount to keep their child satisfied and fed enough to grow.  A supply of 440 mL would actually be just enough milk to cause a 3 kg newborn to be diagnosed to fail to thrive at 1 month since they would not gain any weight if fed this volume of milk. Failure to thrive has known long-term consequences including lower IQ at 8 years of age.  So their conclusion that some mother’s perception of insufficient breast milk may in fact be inaccurate as a volume of 440 mL is in fact “not enough” for most newborns weighing > 3 kg. 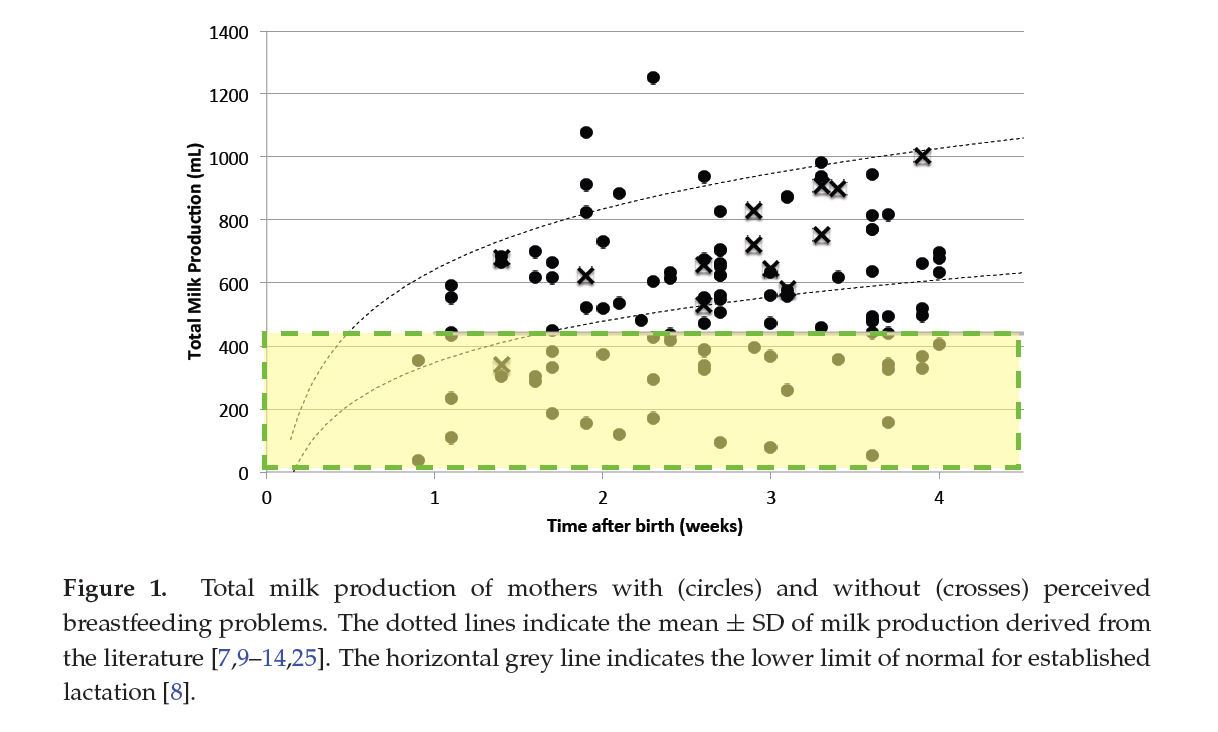 As it stands, the number of women who report breastfeeding problems due to insufficient milk supply is much larger than what mothers are taught through their breastfeeding education sources.  According to a review of the peer-reviewed literature by Human Milk Scientist Dr. Shannon Kelleher, Ph.D., the number of mothers who have insufficient breast milk supply may be much larger that what is commonly taught.  Currently, it is the most common reason reported by mothers who do not exclusively breastfeed for the first 6 months of life.  The Infant Feeding Practices Study II (IFPS II) was drawn from 500,000 households in the United States. Approximately 4,900 pregnant women ages 18 and above participated, and of those, 2,000 received questionnaires throughout the first year of their infant’s life between May 2005-2006 (Li et al, Pediatrics 2008).

It is therefore important to do objective measurements of breast milk supply through 24 hour diaries of test weighing as well as supplemented and pumped breast milk volumes as well as routine weighing of breastfed babies to prevent newborn starvation and failure to thrive.  A mother showing concerns that her child is not receiving enough should receive more than reassurance and encouragement and should receive objective testing to measure her child’s actual daily intake and daily growth in order to protect the brain and vital organs.

What this means is if a mother says her breast milk supply is not enough, she is likely correct.  She may be able to get additional milk through pumping but for many mothers in the first month of life, supplementation will likely be necessary to keep her child from going hungry and experiencing fasting conditions. Babies who receive too little milk can experience starvation-related complications including injury to the brain and vital organs.  If you are a breastfeeding mother who is worried about your child not getting enough though breastfeeding, both your baby and your breastfeeding need evaluation by a pediatrician and a qualified breastfeeding professional.

Because of the belief that need for supplementation is rare, breastfeeding advocacy organizations as recently as this month have restated their recommendation that health professionals should aim to avoid supplementation unless a child is experiencing true metabolic complications associated with underfeeding and starvation as defined by their supplementation guidelines.  It is not sufficient for a child to be showing obvious signs of hunger like crying or hours of nursing to be offered supplementation while they are losing weight and receiving a fraction of their caloric and fluid requirement.

The studies typically included few mothers and others did not actually quantify the volume of milk produced and actually fed (or transferred) to the baby.  The remaining studies on breast milk sufficiency only reported on “perceived” milk insufficiency, which much of the literature dismisses are related to poor confidence, misinterpretation of baby’s crying and are largely viewed as inaccurate and not an actual measure of true milk sufficiency.