By Christie del Castillo-Hegyi, M.D., Co-Founder of the Fed is Best Foundation

The primary reason why newborns experience starvation-related complications every single day as a result of the Baby-Friendly protocol is because the complications associated with the protocol are hidden from mothers who seek to breastfeed.  The primary objective of the Baby-Friendly Hospital Initiative is high exclusive breastfeeding at discharge.  Unfortunately, because the rates of insufficient breast milk and delayed lactogenesis II are high among mothers, the necessary consequences of hospital policies that seek high EBF at discharge rates are higher starvation-related complications like hyperbilirubinemia, hypernatremia, dehydration and hypoglycemia, all of which can cause newborn brain injury and permanent disability.  Below is an example of the way mothers are made to fear formula supplementation while the risks of NOT supplementing are hidden.  This is a waiver form published on the California Department of Public Health Website to provide an example of a model formula waiver form for hospitals. 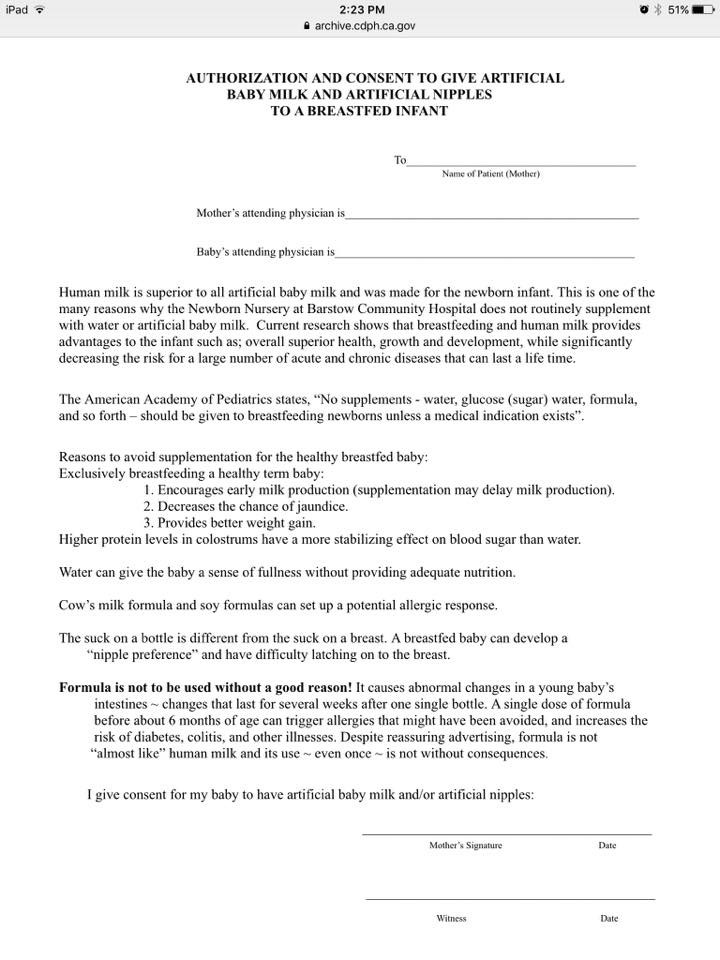 Here are examples of FEAR not FACTS contained in formula feeding waiver forms that Baby-Friendly hospitals require moms to sign before they allow a newborn to be formula-fed.

FACT: The known risk factors for delayed milk production include being a first-time mom, cesarean delivery, flat or inverted nipples, higher BMI > 27, prolonged stage II of delivery (when a mom pushes to deliver), having a large baby, excessive blood loss, being an older mom > 30, PCOS, diabetes, hypothyroidism, insufficient glandular tissue, retained placenta to name a few. While supplementation may be ASSOCIATED with delayed milk production, supplementation is in fact a REFLECTION of the need to supplement a baby who is being underfed due to delayed copious milk production.  (Pediatrics 2003, 112 (3 Pt 1): 607-19)

2. FEAR: Not exclusively breastfeeding puts my child at risk of jaundice.

FACT: Exclusive breastfeeding is among the highest risk factors for excessive jaundice requiring phototherapy admissions according to the American Academy of Pediatrics and 10-18% of exclusively breastfed newborns experience starvation jaundice from insufficient milk intake according to the Academy of Breastfeeding Medicine. Exclusively breastfed newborns are at higher risk of jaundice than supplemented and formula-fed newborns due to the smaller volumes of milk they receive as milk helps the baby pass bilirubin into the stool. In fact one of the ways jaundice is treated and prevented is through supplemental milk feeding.
Pediatrics, July 2004, VOLUME 114 / ISSUE 1, BREASTFEEDING MEDICINE, Volume 5, Number 2, 2010

3. FEAR: Not exclusively breastfeeding will cause my baby to be underfed

FACTS: In the largest studies of supplemented/formula-fed vs. exclusively breastfed healthy, term newborns from a large Baby-Friendly Hospital system, the exclusively breastfed babies lost almost twice as much as the supplemented/formula-fed babies. 10% of vaginally-delivered and 25% of cesarean-delivered EBF newborns lost excessive weight of >10% while NONE of the formula-fed newborns experienced this complication. In fact, exclusive breastfeeding at discharge is associated with an 11-fold higher risk of rehospitalization for dehydration and underfeeding.

4: FEAR: Supplementing will CAUSE low blood sugar and colostrum protects my baby from it.

So NO, colostrum does not protect against hypoglycemia. In fact in the most recent study of EBF newborns, 10% had blood glucose levels low enough to increase risk of lower long-term academic achievement. An even older study on low blood sugar in EBF newborns, 53 out of 200 or 26.5% developed low blood sugar within the first 6 hours of life. What protects against hypoglycemia is providing a child their full caloric requirement, which is 100-120 Cal/kg/day to prevent them from running out of caloric reserve.

FACT: In a study of over 13,000 children, earlier introduction within the first 2 weeks of life of cow’s milk REDUCED their risk of cow milk protein allergy by 19-fold.

6. FEAR: Exclusive breastfeeding is the ideal way of feeding every baby and there are no risks associated it, only risks of NOT doing it.

Of Goldilocks and Neonatal Hypernatremia. Academy of Breastfeeding Medicine Blog.

7. FEAR: Just one bottle will ruin my child’s future health.

FACT: Just one bottle can save a child’s life and save them from a lifetime of disability.

The Fed is Best Foundation is dedicated to the prevention of newborn and infant starvation from insufficient exclusive breastfeeding. We do so by studying breastfeeding stories sent by mothers and the scientific literature on breastfeeding complications that lead to infant brain injury and death. Since the beginning of our campaign almost two years ago, we have received tens of thousands of newborn and infant starvation stories leading to the complications of hyperbilirubinemia, dehydration, hypernatremia,  hypoglycemia and failure to thrive. These complications occur because the current breastfeeding guidelines have not been studied for safety, operates with little awareness of the caloric and fluid requirements of newborns nor the amount transferred to babies until complications have already occurred. “Just one bottle” can save a child from these tragedies as it is often a mother’s first clue that a child is in fact starving from exclusive breastfeeding.

If your baby is experiencing distress and signs and symptoms of starvation, we encourage you to advocate for your child. We encourage mothers to notify hospital administrators if you are being pressured to avoid supplementation to alleviate your child’s hunger. You have the right to feed your child and your child has the right to be fed. No one but your baby knows how close they are to empty. The only way they can communicate distress is by crying. Listen to your baby and listen to your instincts.


Our message is simple. Feed your baby. Feed them as much as they need to stay safe and satisfied. Only they know what they need.

#FedisBest
Click on the infographic below to print for your reference.

If you wish to help parents learn how to protect their newborns from accidental starvation, please share this story and sign our petition to demand that the CDC, the AAP, the U.S. Surgeon General and the WHO/UNICEF Baby-Friendly Hospital Initiative warn parents about the dangers of newborn and infant starvation from insufficient exclusive breastfeeding. Go to https://fedisbest.org/sign-our-petition/.