This is my baby girl in NICU. She developed a high fever, jaundice, and dehydration with a 10.1% weight loss 56 hours after birth while exclusively breastfeeding in a ‘Baby-Friendly’ hospital.

During our stay, the hospital pediatrician saw my baby twice a day but he failed to inform us she had a 7.2% weight loss in the 30th hour of life. Hence, we were not given the information to decide if we should supplement with formula.

According to a review published in the Journal Of Family Practice in June 2018, “exclusive breastfeeding at discharge from the hospital is likely the single greatest risk factor for hospital readmission in newborns. Term infants who are exclusively breastfed are more likely to be hospitalized compared to formula-fed or mixed-fed infants, due to hyperbilirubinemia, dehydration, hypernatremia, and weight loss.” They estimated that for every 71 infants that are exclusively breastfed, one is hospitalized for serious feeding complications.

She was always furiously latching and my nipples were cracked and bleeding from constant nursing. She became very sleepy and now I know she was lethargic. Naively, I continued to breastfeed as instructed, and we told everything was fine until she developed a high fever just before discharging. They suspected bacterial infection and my poor baby endured a spinal tap, blood tests, IV glucose, and prophylactic IV antibiotics while waiting for results to come back. There was a very concerned NICU nurse that told me it’s time someone questions the strict exclusive breastfeeding practices of the BFHI. She was the one that told me to look at the weight loss when I was shocked and confused wondering how on earth my little girl caught a bacterial infection.

After she drank formula and went on a glucose drip, her fever subsided. My baby was starving!

I felt cheated from this breastfeeding “system” and “propaganda” as termed by my husband. I also felt very guilty that I didn’t read up more about my risk factors as a first-time mother. It took 7 days for my milk to come in and I decided to exclusively pump after that as I wanted to be sure my baby was getting enough milk. My baby spent 5 days in the NICU and our hospital bills were thousands of dollars all because of an exclusive breastfeeding policy.

Every time I see the photo of my baby girl, it makes me angry and I will do everything I can to get hospitals to change their breastfeeding protocols and account for their negligence. The marble-size stomach infographic is plastered everywhere in our hospital!

We filed an official complaint with the hospital, and they said they would give us a ‘discount’ on our hospital bills. We were so angry that we were dismissed so we found an attorney to help us. Eventually, we were awarded a malpractice financial settlement. We were also assured our case would set a precedent for the hospital to teach physicians, nurses and new mothers about excessive weight loss while exclusively breastfeeding and the importance of supplementation to prevent breastfeeding complications.

With my second baby, it took 5 days for my milk to come in and this time my baby was fed formula after every nursing and I am happy to say we are still breastfeeding at 8 months.

The current data shows approximately 5.7% or 190,000 U.S. newborns a year require hospital treatment with phototherapy for excessive jaundice, the leading complication of inadequate breast milk intake. A more recent study has shown that 6% of exclusively breastfed newborns require readmission, the majority for jaundice and dehydration. Data from the American Hospital Association has shown that the principal diagnosis for the majority of newborn readmission was for dehydration-related jaundice, which increased from 40% of readmissions in 2005 to 48% in 2009 (hemolytic jaundice rates stayed the same at 2.3% of readmissions). Globally, 1.1 million infants a year will develop severe jaundice (>20 mg/dL), which causes irreversible brain injury and impaired brain development. 114,000 of those infants will die from their severe jaundice, particularly in low- and middle-income countries with insufficient resources to monitor and treat complications of early exclusive breastfeeding. 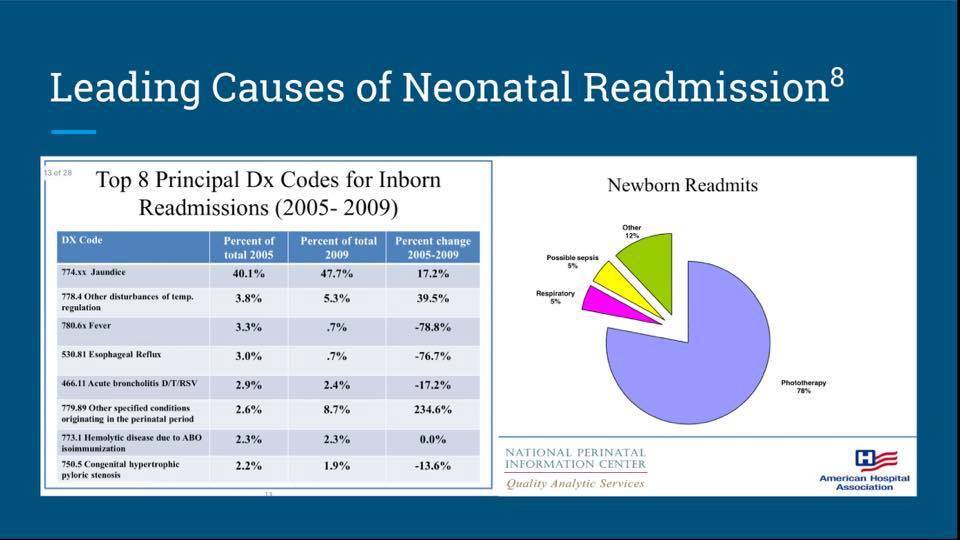 If your baby suffered and was rehospitalized for complications of insufficient breastfeeding, please contact us:

Weight Loss is Not Caused by IV Fluids: The Dangerous Obsession with Exclusivity in Breastfeeding:

Knowing if Your Newborn is HUNGRY and Needs Urgent Evaluation / Supplementation